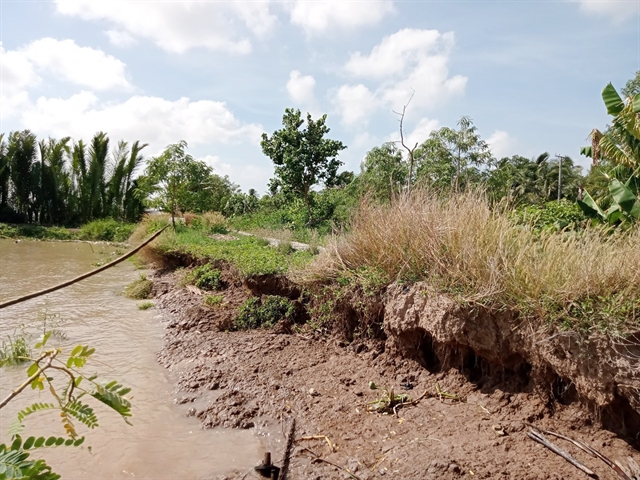 SÓC TRĂNG – The Sóc Trăng Province People’s Committee has declared an erosion emergency on the Hậu River, a tributary of the Mekong, in Cù Lao Dung District.

There are more than 30 eroded areas with a total length of 2,450m along both banks in An Thạnh Đông and Đại Ân 1 communes.

There are 300 households, 30ha of aquaculture and 400ha of vegetable and fruit farms close to the eroded areas.

If the problem is not fixed promptly, they will have a large impact on the lives of locals, according to the district People’s Committee.

The committee and the province’s Department of Agriculture and Rural Development are responsible for installing warning boards at dangerously eroded areas, it said.

Local authorities have been told to apprise households in eroded areas whose houses are in danger of subsiding or sliding into the river to move to safer areas.

They will mobilise available human resources, vehicles and other facilities to help locals to move to safe areas or rescue them in case of further erosion.

They will co-operate with the province Steering Committee for Climate Change Response, Natural Disaster Prevention and Control, and Search and Rescue; and the Rural Development Sub-department for the purpose.

Phạm Tấn Đạo, head of the sub-department, said erosion along rivers and canals in Cù Lao Dung has increased in recent years, damaging roads, houses and other infrastructure.

The peak is during the rainy season and when there are floods and high tides, he said.

According to the sub-department, the Hậu River section in the district has been suffering erosion along a length of 500-1,000m every year since 2019.

Vương Quốc Nam, deputy chairman of the province People’s Committee, said there are only temporary solutions and each case of erosion is addressed when it occurs.

In the long term the province needs research by scientists to have optimal solutions, he said.

The cost of building sea and river dykes is very large and financial support from the Government is needed to build them, he said.

The province is advocating against building houses near junctions and bends in rivers and canals, and near erosion – prone areas to ensure people safety.

It has speeded up construction of residential areas for relocating families from erosion – prone areas. – – VnExpress News