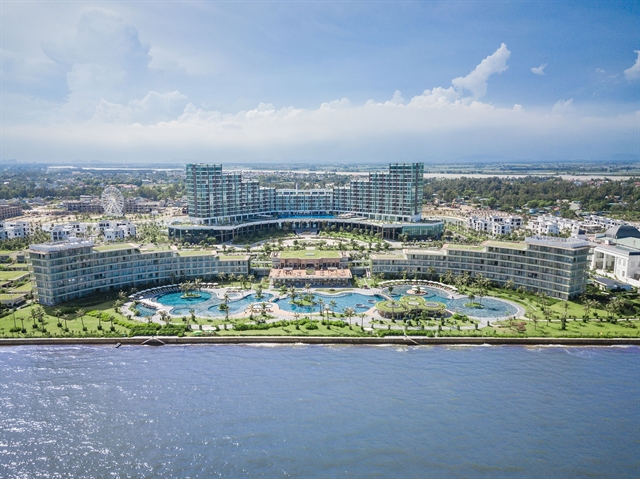 FLC Sầm Sơn resort in Thanh Hóa Province. Part of investors sought to seek profits in mid caps such as FLC, pushing the share price to the ceiling. — Photo flc.vn

HÀ NỘI — Việt Nam’s benchmark VN-Index remained in positive territory on Thursday but divergence widened among blue chips while some investors sought to seek profits in small- and mid-cap shares.

On the Hồ Chí Minh Stock Exchange, the VN-Index inched up 0.14 per cent to close at 1,461.34 points. The southern market’s index gained more than 1 per cent in the last three sessions.

The market breadth was positive with 240 shares rising, 189 falling and 81 closing flat.

However, blue chips were mixed. Of the top 30 largest shares by market value and liquidity, 12 advanced while 13 declined. The other five remained unchanged.

Banks were still the market drivers. Half of the 10 biggest contributors to the VN-Index were banking shares, of which BIDV (BID) was the biggest gainer with growth of 4.6 per cent, followed by Vietinbank (CTG), up 2.2 per cent. Vietcombank (VCB) sustained its uptrend but slowed growth to just 0.6 per cent on Thursday. The other two big gainers included Sài Gòn-Hà Nội Bank (SHB) and Hồ Chí Minh Development Bank (HDB) increasing 1.6 per cent and 1.3 per cent, respectively.

On the other end of the spectrum, Techcombank (TCB), Tiên Phong Bank (TPB), VPBank (VPB) and Sacombank (STB) declined by less than 1 per cent each.

Liquidity improved slightly, however, with 717.4 million shares worth VNĐ21.4 trillion (US$931 million) being traded, up around 15 per cent in both volume and value over Wednesday’s levels.

According to analysts at Viet Dragon Securities JSC (VDSC), despite the VN-Index rising, the demand was not stronger as it could only help VN-Index move around the preference threshold.

“Perhaps the expiration of the derivative contract (VN30F2203) on March 17 has affected the trading sentiment of investors. It is expected that the VN-Index may continue to regain but need to be cautious of the pressure of the resistance zone of 1,470 points,” said Phương Phạm, VDSC’s analyst wrote in a note.

On the Hà Nội Stock Exchange, the HNX-Index closed unchanged compared to the previous day at 446.16 points. Liquidity also increased here with over 108 million shares worth VNĐ2.7 trillion being exchanged, up 30 per cent in volume and 14 per cent in value over Wednesday.