Seafood stocks expected to grow in 2022 on bullish outlook 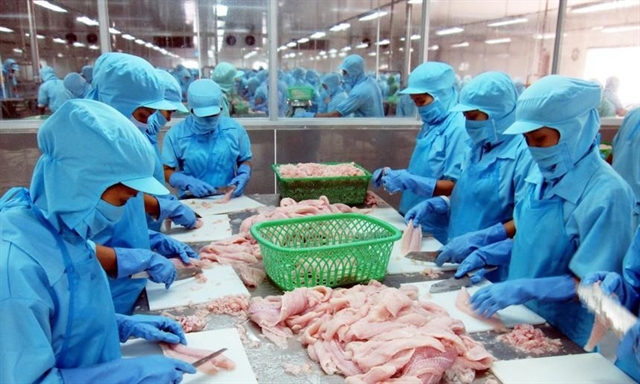 HÀ NỘI — With a relatively attractive valuation and a bullish industry outlook, seafood stocks are expected to grow positively in 2022.

The prospect of the seafood industry in 2022 is expected to continue to be optimistic, with export turnover forecast to reach US$9 billion, An Bình Securities Joint Stock Company said.

According to analysts, the recovery and reopening of the global economy, especially in the US and Europe, thanks to the promotion of vaccinations, will boost demand for Vietnamese seafood exports.

The seafood sector also benefits from multilateral and bilateral trade agreements. As the EU-Việt Nam Free Trade Agreement (EVFTA) comes into effect, some shrimp products exported to the EU with a tariff rate of 12-20 per cent will be reduced to 0 per cent, such as frozen black tiger shrimp.

This will reflect in the positive upcoming business results of seafood exporters in the fourth quarter of 2021 and the whole of 2022.

In addition, as stock valuation is not high, the seafood industry is still attractive to investors.

On the stock market, except for Vĩnh Hoàn Corporation (VHC), seafood stocks witnessed a strong correction in January after surging last year, with Minh Phú Seafood Corporation (MPC) down 15 per cent, Navico (ANV) dropping 25 per cent, Camimex Group (CMX) down 33 per cent and Sao Mai Group Corporation (ASM) down 27 per cent. However, these stocks started to recover and gained quite sharply from the beginning of February.

Especially, on February 14, while the market benchmark VN-Index dropped nearly 30 points, seafood was one of the rare stock groups posting positive performance.

Of which, VHC and ANV hit the ceiling price of 6.9 per cent, while many other stocks rose such as I.D.I International Development & Investment Corporation (IDI) up 6.5 per cent, Cửu Long Fish JSC (ACL) up 5 per cent, and CMX up 4.4 per cent.

Despite difficulties, especially during many months of social distancing due to the pandemic, the seafood industry has experienced a successful year in 2021.

Most businesses in the industry recorded positive business results in the past year, with revenue and profit margins increasing thanks to the recovery of export seafood prices.

In the last quarter of 2021, the leading exporter of the industry, Vĩnh Hoàn, posted consolidated net revenue of VNĐ2.69 trillion, up 33.8 per cent over the same period in 2020, resulting in a gain of 175 per cent in profit after tax to VNĐ461.2 billion. This was the company’s highest quarterly profit since mid-2018.

Sao Ta Foods JSC(FMC) also reported good results in the last quarter of 2021. The company’s revenue exceeded the milestone of over VNĐ1.44 trillion, while its profit after tax reached over VNĐ110 billion; up 19.4 per cent year-on-year and 73.4 per cent, respectively.

For the whole of 2021, Sao Ta Foods posted record revenue of nearly VNĐ5.2 trillion, while its profit after tax also hit an all-time high at VNĐ285.6 billion.

Similarly, Camimex Group reported revenue in the fourth quarter of 2021 double the same period of 2020 and profit increased 23.6 per cent over 2020 to VNĐ23.78 billion.

Meanwhile, Minh Phú Seafood, which has yet to announce the fourth quarter’s consolidated financial statements, would like to extend the deadline for submitting business results until February 25.

According to a report from SSI Securities Corporation, the industry’s average price to earnings ratio (P/E) increased to 11-13x in 2021, from 7-9x. VnExpress News

Previous Car sales down 34 per cent in January
Next Việt Nam aims to have no accidents caused by mines and explosives across the country by 2025: PM