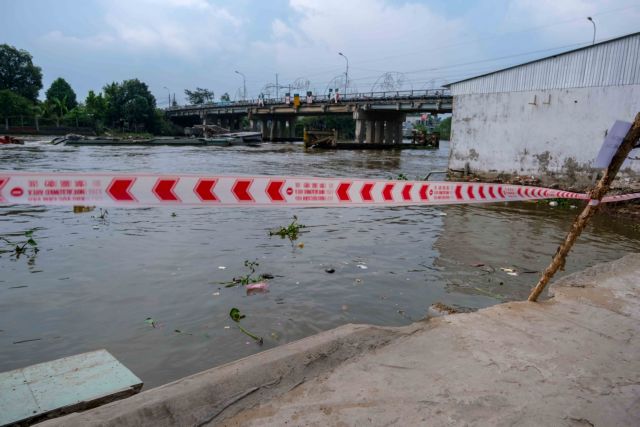 CẦN THƠ – Erosion along the Ô Môn River in Cần Thơ City on Monday dragged four houses and a part of another into the water.

There were no casualties.

The eroded site, in Châu Văn Liêm Ward in Ô Môn District, is 40 metres wide and 10 metres deep. There are many houses at the spot.

There have been signs of erosion for many years, according to locals.

In fact, 10 days before the incident, people in four of the five houses moved to safer places after seeing cracks appear.

Tống Thị Mai, who owned two of the four destroyed houses, said after seeing signs of erosion, she hired people to use rocks and build a dyke to consolidate the riverbank.

Yet, a week later, erosion occurred, she said.

Local authorities have installed barriers and boards instructing people to keep out of the eroded site.

The Ô Môn River, which plays an important role in the city’s waterway transport, has a large number of boats travelling constantly, which create large waves that slam into the banks, triggering erosion.

The city is implementing many erosion prevention projects along the river, including embankments in three different places running 3.7km at a cost of VNĐ410 billion (US$18 million) in Ô Môn District’s Thới An and Thới Hoà wards.

In the Cửu Long (Mekong) Delta province of An Giang, authorities are assisting people affected by strong rains and winds that damaged 158 houses in Phú Tân and An Phú districts and Tân Châu Town on March 27.

The houses were flattened or had their roofs blown off, and there were no casualties.

An Phú accounted for 113 houses, Phú Tân for 41 and Tân Châu for four.

Local authorities have visited the affected households and instructed relevant agencies to help them repair their houses.

Trần Hoà Hợp, chairman of the An Phú People’s Committee, said each household was provided relief worth VNĐ5 million ($220) on Monday.

The province is now carrying out procedures to provide further financial support for them soon. – VnExpress News