Residents struggle in deteriorating houses due to delayed park project 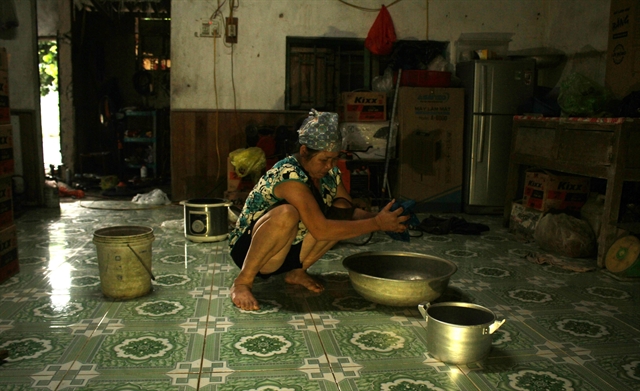 In deteriorating houses in Ích Duệ Commune, containers are used to deal with roof leaks during the rain. — VNA/VNS Photo Hải Yến

NINH BÌNH — Families living in a hamlet in Ninh Bình say they have been left in limbo because they are unable to renovate their homes.

More than 14 years ago, permission was granted to create a cultural park on an area of land where 80 houses stand in Ích Duệ hamlet, Ninh Nhất Commune.

But since then work has not started.

The delay to Tràng An Cultural Park has left families in a dire situation, as part of the official plan means house renovation is very limited.

Nguyễn Thị Hải, a resident in the commune said that she received the notice from local authorities before 2010, stating that her family’s 400-square-metre land would be cleared for Tràng An Cultural Park project.

Until now, however, authorities only came to check the current state of the land and take measurements. The family has not received any compensation or direction for relocation.

Their old, simple rural house now shows serious signs of deterioration, with the family struggling with a leaky roof every time it rains.

Hải said: “In 2017, my husband was terminally ill and needed a large amount of money for treatment. At that time, the house was the most valuable asset in the family.

“I took the house ownership documents to the banks and tried to take a loan against the property, but none agreed since our house is part of an official plan.”

Her husband passed away a year later.

She added: “Now my two sons have both grown up, but we could not divide the land for them to build their own houses.

“I just hope that the authorities will soon have a solution for compensation and relocation so that people can settle down.”

The kitchen of Đoàn Thị Mơ’s family is also in the same situation.

Without renovation, the old structure has become increasingly unstable to the point that Mơ is afraid the roof could collapse at any time, especially on stormy days.

However, the amount was so small that people required a reassessment from the authorities.

According to Ninh Bình City People’s Committee, the city has conducted assessments, announced the plan for land acquisition, and developed a draft plan which was made public for comments from the people.

Until now, however, site clearance work is still delayed due to the lack of funding.

In regard to the degrading residences, the Commune People’s Committee and relevant departments are tasked with evaluating and creating suitable renovation plans upon the residents’ request, ensuring safety and efficiency.

The committee is also assigned to assess the state of the houses during the rainy season, and promptly develop a plan if the conditions are unsafe.

The city People’s Committee also expressed its hope that the project will soon proceed to compensate and conduct site clearance, relocating the people so that they can soon settle down. — VNS