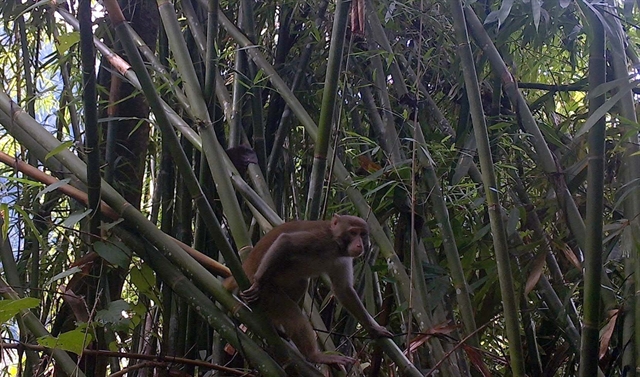 The discovery of the primates, which belong to one order and two families, was the result of a scientific project on evaluating and preserving primates in the region from 2019 to 2021.

Việt Nam primates are mainly found in Hà Giang and Tuyên Quang provinces in the north alongside Thanh Hóa Province, with many species listed in the Red Book of Việt Nam.

Nguyễn Phương Đồng, director of the Management Board of the Pù Hu Nature Reserve, said that during the three-year project implementation, the management board conducted 10 investigations and six observations on primates in Pù Hu forests.

Thirty-three conferences on the topic were organised, 11 clubs on primate preservation were set up at schools, and 2,650 locals signed up commitments to protect primates, he stated.

Among the five primate species detected, the monkey family has four, namely Stump-Tailed macaque, Rhesus monkey, Assam macaque, and Gray langur; and the Loris family has one: the Pygmy Slow Loris. In addition, 41 individuals of five species were observed.

The Pù Hu Nature Reserve is home to many rare animals, with up to 30 listed in the Red Books of Việt Nam and of the International Union for Conservation of Nature, including Tibetan bears, Malayan bears, Gayals, and Delacour’s langur. — VNS