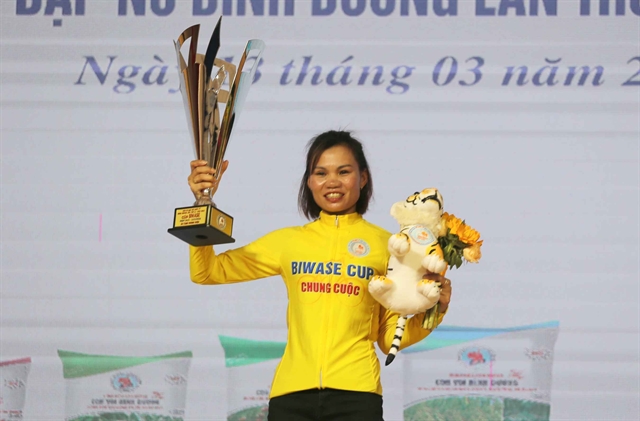 HÀ NỘI — Cyclist Đinh Thị Như Quỳnh shed tears of happiness and sorrow at the top of the podium after winning the Biwase Cup Women’s Cycling Tournament. Despite winning the event for the first time, her celebrations were marred by the sudden passing of her father during the race.

Quỳnh not only won but also set a new record at the Biwase Cup Women’s Cycling Tournament which ended on March 13.

Her amazing result strengthened her chances of defending her title at the coming 31st Southeast Asian (SEA) Games in May.

The 30-year-old was among the title candidates at the 1101km-tournament, behind former Asian champion Nguyễn Thị Thật, who is national No. 1 in road racing events.

Top of the podium

After 10 days of competition, Quỳnh surprised the crowd by securing two individual titles. She won all 10 stages with a total time of 30hr 52.08min and kept the yellow jersey from the first to the last stage, which is a record of the 12-year-old Cup.

She also grabbed the polka dot jersey for the Queen of Mountain, winning all three mountain challenges.

Talking about his athlete’s victory, coach Bành Chấn Quyền said: “Her result is unbelievable. No one could do such a big job in the past.”

“Besides a little luck, her success is a combination of great effort, strong determination and an iron mind,” said Quyền, adding that it was a perfect ending for his athlete. Her father died during the second stage of the race.

“I was really sad hearing the worst news ever. My father died because of the COVID-19, so my family was asked to incinerate him immediately. I could not return home to see him for the last time,” said Quỳnh.

“Coaches and teammates condoled and encouraged. I decided to compete harder to get a high result as my last present to him.” 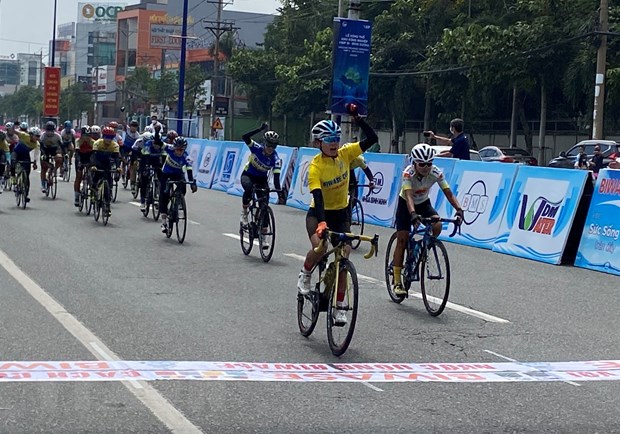 Loss and tears made Quỳnh stronger. She powered through the pedals for the rest of the tournament, giving no one else a chance to steal her leading position.

She did a better job than what she promised to her father, not only having a high position but winning the prestigious Cup for the first time.

Cycling my way to the top

Born in 1992 in Hòa Bình Province, Quỳnh grew up in poverty although her family worked hard.

They grew rice and sugarcane. They sold what they could and kept the rest for themselves.

Her life changed when she came first in a Tân Lạc District run and she was picked for the provincial sports training centre’s cycling team.

The Mường ethnic minority girl did not know anything about the sport but agreed to cycle, to save food for her parents and to earn a salary.

Quỳnh showed her potential, despite suffering pains and hurt in the first months of training.

These tough challenges could not stop the talented 16-year-old girl. Four months later, she was named in the national team, and now she is one of its key members.

“Cycling has saved me from a poor life. I can help my parents and save money,” said Quỳnh.

In 2016, she joined Biwase Bình Dương, and her husband was given a job in the Bình Dương Water Supply Sewerage and Environment Company, which is the owner of her club.

The company also supported her to buy an apartment for the family who previously lived in a rented 12sq.m room.

“I don’t know what would have happened if I did not start cycling. I have a debt with cycling and I will pay back until I can’t,” Quỳnh said.

This was the reason that Quỳnh didn’t retire after the Manila SEA Games, returning to the sport after several days deciding her future.

“I wanted to move to a coaching job so that I could have more time with family. However, the coaches asked me to contribute some more years,” said Quỳnh.

“My husband also said he could take care of our son, and more importantly, I am still in love with my bike. So I keep cycling,” she added.

After two years of training with the national team, Quỳnh made her SEA Games debut in 2011 and she won a cross country gold, to everyone’s surprise.

At the 2019 Games, she won a second and is now heading for a third. 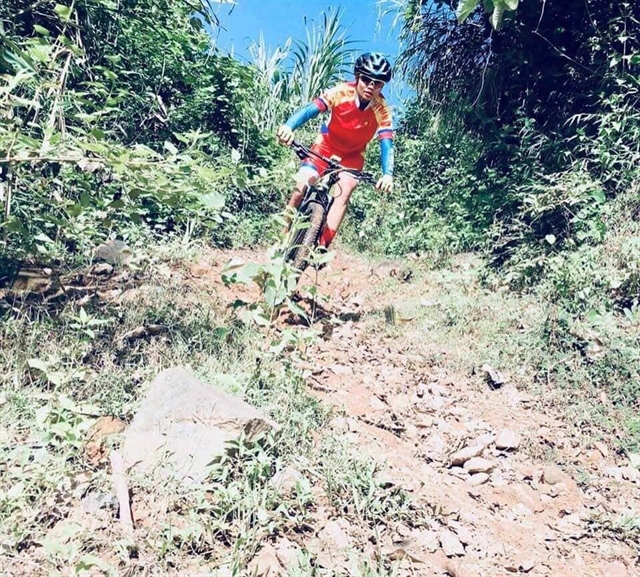 “Quỳnh is a brave and strong-minded athlete. She has overcome many difficulties in life to reach high results in her career. She is our pride,” said coach Quyền.

The coming Games will be special for Quỳnh. Not only will she compete as a host athlete but also compete in her home province of Hòa Bình.

And she has the coaching board’s trust.

“Our women’s cycling squad is good. Our best athletes, including Quỳnh, are in good form,” said Nguyễn Ngọc Vũ, general secretary of the Việt Nam Cycling and Motor Sports Federation. “We believe they would win again when competing on home ground.” — VnExpress News