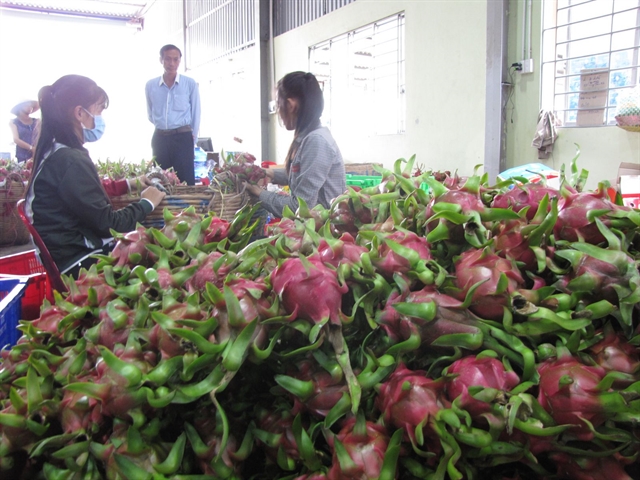 Dragon fruit is one of the key crops of Long An Province. — Photo baolongan.vn

HÀ NỘI — Demand for Vietnamese dragon fruit in foreign markets is increasing, with many importers interested in high-quality fruit from Việt Nam.

The Việt Nam Trade Promotion Agency, the Department of Industry and Trade of Long An Province, and the trade offices of the Vietnamese Embassies in New Zealand and Australia jointly organised a consulting session on exporting dragon fruits to Australia and New Zealand in the southern province of Long An last week.

Việt Nam wants New Zealand to share its experience and support Việt Nam in building an international brand and value chain for the global commercialisation of dragon fruit, following the successful model of New Zealand’s kiwi fruit, which is recognised worldwide.

Agencies recommended that businesses and localities develop advertising and industry branding strategies on the nutritional properties of their products to enhance consumer awareness and expand customers in addition to the traditional Asian customer group.

Deputy director of the provincial Department of Industry and Trade Châu Thị Lệ expressed hope that through the session, dragon fruit producers would have more information, knowledge and opportunities to bring dragon fruit to potential markets such as Australia or New Zealand.

Dragon fruit is one of the key plants of the province. Long An ranks second in the country in terms of planting and harvesting dragon fruit with about 11,822 hectares, and the fruiting area is approximately 11,000 hectares.

The provincial dragon fruit exports are mainly fresh and frozen to many markets, including China, Korea, the US, Japan, Canada, New Zealand, Australia, and some Southeast Asian countries. The Chinese market accounts for about 80 per cent of export volume.

However, recently, China’s import and export management policy, the complicated pandemic situation, and the increase in dragon fruit growing areas in China have caused many difficulties and losses for Vietnamese growers and export enterprises.

The provincial Châu Thành dragon fruit has also been granted a certificate of geographical indication registration by the Intellectual Property of Việt Nam. The Tầm Vu dragon fruit trademark has been protected in five countries, including the US, France, Japan, Singapore and China.

Nguyễn Quốc Trịnh, Chairman of Long An Dragon Fruit Association, said the high price was due to that it was the beginning of the crop, so not much fruit had been produced yet.

In addition, growers could not sell or sell at a good price during the previous dragon fruit crop due to the pandemic, so they did not invest and had little capital to invest, reducing the output of dragon fruit to less than 50 per cent compared to the previous crop. — – VnExpress News