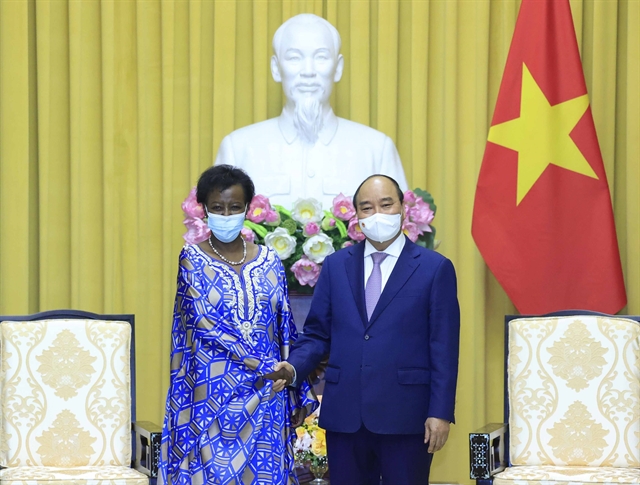 HÀ NỘI — Vietnamese President Nguyễn Xuân Phúc said on Friday that the 88 Francophone countries represent huge economic potential and there should be more cooperation in this regard.

He made the remarks when receiving the Secretary General of the Organisation Internationale de la Francophonie (OIF) Louise Mushikiwabo, who is on an official visit to Việt Nam to attend the Việt Nam-Francophone High-level Economic Forum that opened in Hà Nội on Thursday.

At the meeting, President Phúc highly appreciated the OIF’s decision to choose Việt Nam as the first destination to start its series of economic and trade promotion activities, with nearly 100 businesspeople from countries that speak French across all continents.

Noting the OIF’s efforts in people-oriented activities, the Vietnamese President welcomed the promotion of economic and trade cooperation between member countries.

With 88 countries and state governments making for a population of 1.2 billion people and accounting for 16 per cent of global GDP and 20 per cent of global trade, the Francophone group has vast economic potential that needs to be realised and capitalised on to serve socio-economic recovery and development in member countries.

Thanking OIF for the provision of assistance to Việt Nam during international integration, President Phúc affirmed Việt Nam would continue to be an active, responsible member of the organisation.

On the basis of promoting Việt Nam’s strengths in a market of nearly 100 million people, the President suggested the two sides continue to help connect businesses, provide support to strengthen South-South cooperation as well as cooperation between Việt Nam and South African countries – especially in terms of rice, cotton, cashews, and coffee – along with the cooperation between Việt Nam and the African Union, and at the same time strengthen training support for army soldiers and in the future.

The Vietnamese leader also sought support in training for Vietnamese military officers and police officers who will be in the future taking part in UN-led peacekeeping missions in French-speaking countries in Africa.

President Phúc also expressed the wish that the OIF would support ASEAN and Việt Nam’s principle on the maintenance of security, freedom of navigation and overflight in the seas, refrain from using violence or threatening to use violence, and addressing all conflicts via peaceful measures and compliance with international law.

Secretary General of OIF Louise Mushikiwabo stressed that all programmes and action plans of the organisations were people-oriented and the priority areas for cooperation with member countries included economic performance, digital transformation, and administrative reforms.

The OIF was striving to become a forum for member countries to meet up and understand each other’s unique characteristics.

With the view that OIF must put French language in a multilingual environment instead of a competition between languages, the Secretary-General also wished to continue to cooperate with Việt Nam in enhancing the teaching of French, as well as economic and trade cooperation within the community, of which Việt Nam is one of the priorities. — VnExpress News

Previous Shares struggle to stay positive, textile and retail stocks spur market
Next ​People fleeing Ukraine not sure of livelihood in Vietnam