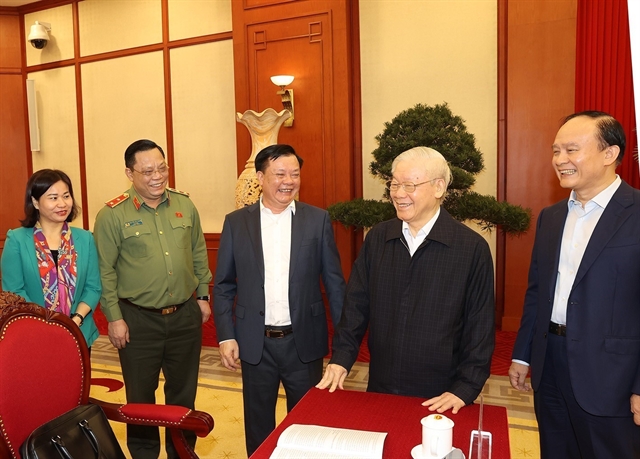 HÀ NỘI — The Politburo has agreed to issue a resolution guiding the development of the capital city until 2045.

The document will help Hà Nội to strengthen its role as the political headquarters and a cultural centre of the country.

The decision was made during the Politburo’s meeting in Hà Nội on Friday, which reviewed the city’s development during the 2011-20 period.

The new resolution divides the next development period of the city into two phases: from now until 2030, and until 2045.

By 2030, it aims to help the city complete its industrialisation and modernisation process, lead the northern region and the country in economic development, and be on the same level as the capital cities of developed countries in the region.

By 2045, the goal is to turn Hà Nội into a globally connected and modern creative city with high living standards and quality of life, as well as a note-worthy capital city with a comprehensive mix of economic, cultural and social development.

The Politburo asked the Party Committees, all-level authorities, and Hà Nội citizens to collaborate with sectors to implement the resolution.

Party General Secretary Nguyễn Phú Trọng said: “The Party committees, authorities and citizens need to be well aware of the significant role and position of a capital city. Hà Nội is our capital city and the heart of the country. A capital city of conscience and dignity, the face of the nation, a city of peace.”

“Hà Nội has a history of thousands of years of civilisation, a long culture, a glorious revolutionary process that represents the cultural and heroic tradition, peace and friendship of the Vietnamese people,” he said. “Hà Nội has expanded a lot, it’s not limited to the 36 streets (in the Old Quarter) anymore.”

The Party chief also stressed that the revised Law on the Capital needs to strictly follow the directions of the new resolution.

Members of the Politburo also discussed the achievements and challenges of the capital city’s development from 2011 to 2020.

Guided by Resolution 11, issued in 2012 by the 11th Politburo, the 10-year process helped Hà Nội to tap into its potential and advance in several areas.

Good economic growth was attained during this period at an average rate of 6.83 per cent a year, higher than the country’s average. Important milestones were achieved in the areas of culture, education, science and technology, ethnicity, religion, social security, and healthcare.

The people’s quality of life also improved. The city ensured social order and safety and created more external relations, increasing its position as a capital city in the eyes of both citizens nationwide and international friends.

However, it did not reach some objectives and goals, including the gross regional domestic product (GRDP) being lower than that of some major provinces and cities.

The city also had not fulfilled its role as an economic centre of the northern region, and its connections with other localities in the region and across the country are not strong enough. There are also shortcomings in the Party building process, the political system, and State management work in some areas. VnExpress News