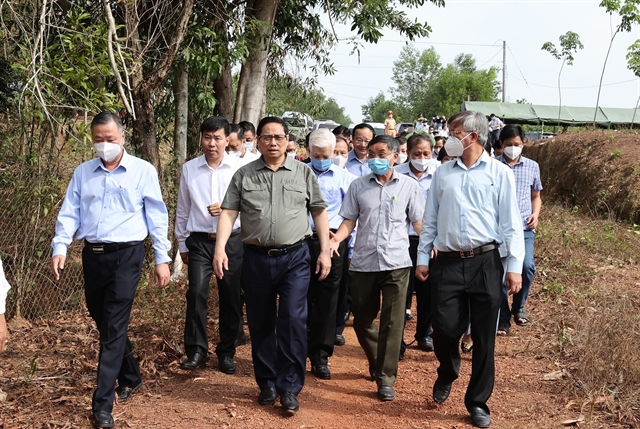 A highlight of the visit was a field trip to Mã Đà Stream in Đông Phú District, where he spoke with local authorities about a plan to build roads to connect Bình Phước with neighbouring Đồng Nai Province, and other provinces in the southern region.

The roads will also be connected to major traffic routes in the region, as well as to the Cái Mép-Thị Vải Port in the southern province of Bà Rịa-Vũng Tàu, and the Long Thành International Airport in Đồng Nai Province.

The construction of new traffic infrastructure would be pivotal to the socio-economic development of Bình Phước, the PM said during the field trip.

He asked local authorities to conduct thorough research and come up with the “shortest, most effective” construction plans, which require the least land clearance and leave as few consequences to the locality as possible.

The PM also visited the CPV Food Complex and attended the launching ceremony of the Hayat Kimya Việt Nam factory, both located in Becamex Bình Phước Industrial Park. The former is the largest chicken processing complex in Southeast Asia, and the latter is a US$25 million diaper production factory invested by Turkey.

Speaking at the ceremony, PM Chính said the Turkish corporation’s commitment to expanding its business in Việt Nam showed that the country was an attractive destination for international investment.

He stressed that Bình Phước had all it needed to develop, especially in the industrial sector, but had not lived up to its potential. That’s why good development of infrastructure, human resources, public administration, planning, management, and environmental protection was essential to helping it grow. VnExpress News