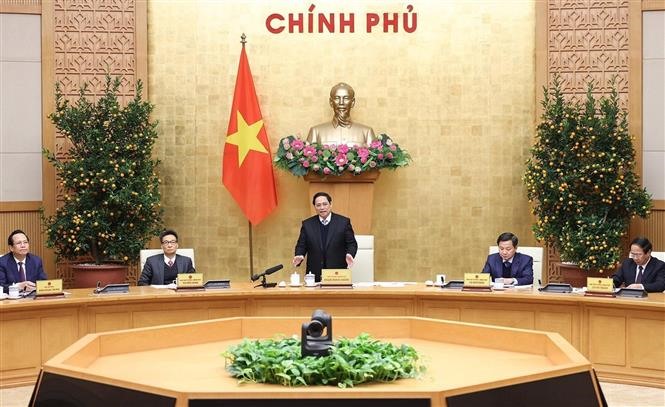 Speaking at a Cabinet meeting, the PM highlighted good results of the spring vaccination campaign and called for greater efforts in the implementation of Resolution No. 128/NQ-CP and directives and guidelines of the Government and the PM on the fulfillment of tasks after the festival.

The COVID-19 pandemic has been controlled nationwide, he said, adding that traffic accidents also dropped in the numbers of cases, deaths and injuries and the social welfare work was carried out effectively, especially in such major cities like Hà Nội and HCM City.

Ministries and agencies coordinated in bringing home residents for family reunion during the Tết holiday orderly and safely, the PM said.

Meanwhile, cargo congestion at northern border gates was handled, and goods supply and demand were ensured, he continued.

Pointing out an array of challenges ahead such as the complex developments of the pandemic, risks to social order and safety, soaring global oil price and the operation of hostile forces, Chính asked ministries and agencies to seriously and effectively implement tasks after Tết, including the pandemic fight.

According to the PM, schools at all grades nationwide will reopen from February 7-14, and the tourism sector will resume its normal operations no later than April 30. — VnExpress News

Previous WHO sees pause, even end of pandemic for Europe
Next PM urges preparation for full tourism reopening in March