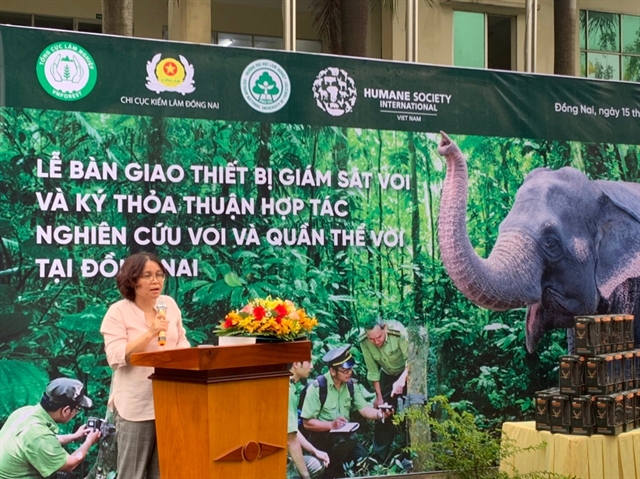 ĐỒNG NAI — The Forest Protection Department in the southern province of Đồng Nai on Friday received equipment, including 10 cameras and 60 camera traps, to better manage and protect elephants in the province.

This is a part of the project “Protecting Asian elephants in Đồng Nai through solutions to reduce and prevent human-elephant conflict in a sustainable way” implemented by the province’s Department of Forest Protection, the Việt Nam Administration of Forestry and Humane Society International (HSI).

On Friday, the agencies also signed an agreement to cooperate in research on the ecology and behaviour of elephants with a branch of the University of Forestry in Đồng Nai to ensure the continuity and sustainability of the programme on elephant monitoring.

The elephant and habitat monitoring programme aims to understand elephants and their habitats – one of the fundamental solutions for elephant conservation and reducing human-elephant conflict.

Trần Quang Bảo, Deputy Director of the Việt Nam Administration of Forestry, said that the elephant population in Việt Nam had declined dramatically over the past four decades.

However, after much effort, the elephant population in Đồng Nai showed positive signs.

Recently, the Government allowed to extend the implementation of the Master Plan on Conservation of Vietnamese Elephants to 2025, which created favourable conditions for the province to continue conservation.

“The cooperation based on each side’s strengths to monitor elephant herds to come up with management solutions has clearly demonstrated the commitment of all parties in efforts to conserve and sustainably develop elephant populations in Việt Nam,” he said.

Lê Việt Dũng, Deputy Director of the Đồng Nai province’s Department of Forest Protection, said that the donated equipment would be useful tools for identifying and building an information database for each elephant.

“Individual identification helps us understand the social structure of the herd, the individual’s physical and morphological characteristics, ideas about their movements, and how elephants use such habitats. This information is very important for preventing and reducing conflicts to achieve the goal of harmonious coexistence between humans and elephants,” he said.

Thẩm Hồng Phượng, HSI’s Country Director in Việt Nam, said that the human-elephant conflicts had occurred for many years, damaged crops and caused panic in the surrounding communities.

“The decline in elephant populations in Việt Nam in the last two decades and the disappearance of many species such as the java rhino and the tiger puts a lot of pressure on conservationists like us,” she said.

“We hope this surveillance study will help us get to the root of the problem and that the results will be a ‘voice’ that reflects the needs of animals – a stakeholder that we rarely consult when developing plans conserving them.

“We firmly believe that preserving and increasing the wild elephant herd naturally in Đồng Nai will be a great source of inspiration for conservationists across the country.” — VnExpress News