PM meets with friends of Việt Nam in the US 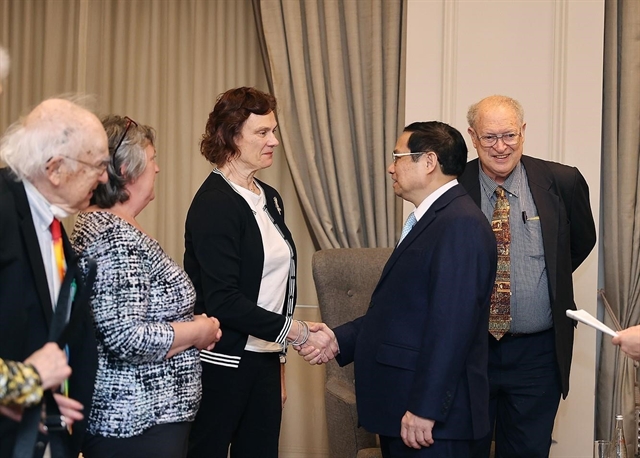 Prime Minister Phạm Minh Chính on May 15 (US time) had meetings in New York with John McAuliff (right) and a group of Americans who supported and advocated for victims of Agent Orange in Việt Nam. — VNA/- VnExpress News Photo

NEW YORK — Prime Minister Phạm Minh Chính on May 15 (US time) held meetings with American friends who have stood by Việt Nam and its people as part of his working visit to the US.

In the meeting with John McAuliff and a group of Americans who have helped support Vietnamese victims of Agent Orange/dioxin, PM Chính said other than looking to future possibilities of bilateral cooperation, the Vietnamese delegation also discussed with the US side the handling of war consequences that still haunt Việt Nam to this day.

There are still three million people suffering from the impacts of Agent Orange, not to mention the risks of continuing diseases and deformities afflicting future generations and the millions of hectares of contaminated land, he said. Up to 200,000 Vietnamese war martyrs have still not been found, while unexploded bombs and mines continue to threaten the safety and livelihoods of many Vietnamese people on a daily basis.

For his part, John McAuliff thanked Việt Nam and the leadership for the goodwill to ‘overcome the past and look forward to the future,’ and for the cooperation between the two countries in handling war consequences – including the search for American MIAs in the war in Việt Nam, which has contributed to the healing process.

He recalled having come to Hà Nội for the first time on April 30, 1975 and has visited Việt Nam many times since as part of his role as Executive Director of the Fund for Reconciliation and Development, which has been organising several Việt Nam-US people-to-people exchanges and making efforts to enhance understanding about the war and the handling of its legacies.

The PM hoped the American friends to have more robust, effective measures and practical programmes to address the most urgent issues in handling war legacies – including the decontamination of Biên Hoà airbase, livelihood support for Agent Orange victims, support for genetic analysis to identify martyrs, and especially inspiring younger generations to continue their work – in coordination with Vietnamese agencies through the help of the Ministry of Foreign Affairs.

The same day, PM Chính also met a number of close friends of Việt Nam, who have made active contributions and always supported Việt Nam during the war as well as during present nation-building efforts. Attending the meeting were Merle Ratner and some colleagues who are co-founders and coordinators of an organisation that advocates for relief and responsibility for victims of Agent Orange in Việt Nam; Jay Johnson, who joined the first group of US soldiers to resist the draft to be sent to fight in Việt Nam and was sentenced to 28 months in prison; and Susan Schnall, a former US Navy nurse, who with her husband used a plane to drop leaflets calling on soldiers to resist the order to deploy to Việt Nam, as well as some active members of leftist movements in the US.

American friends expressed their impression of Việt Nam’s great achievements after 35 years of đổi mới (reforms), announced a number of activities being carried out to continue supporting Việt Nam, and discussed with the Vietnamese leader the situation in Việt Nam, the region and the world.

Việt Nam consistently implements the foreign policy of independence, self-reliance, for peace, friendship, cooperation and development, multilateralisation and diversification of foreign relations, PM Chính said, adding that Việt Nam seeks to be a good friend, a reliable partner and an active and responsible member of the international community.

Việt Nam and the US have set aside past hostilities and have been working together to advance ties across all fronts, on the basis of respecting each other’s political system, territorial integrity and sovereignty, he noted.

One of the pillars of the bilateral relationship is economy, trade, and investment. In 2021, Việt Nam-US trade reached US$112 billion, accounting for nearly one third of the total US-ASEAN trade at $362 billion, and enjoying an annual growth of 17-20 per cent.

Informing the American friends of the current situation in Việt Nam, which has successfully controlled COVID-19 and is engaging in robust socio-economic recovery, the Vietnamese Government sent his regards for the American people’s support for Việt Nam during the war and normalisation of ties, and asked them to continue to advocate and contribute to bilateral cooperation for the sake of peace, cooperation and development of the two countries. — – VnExpress News