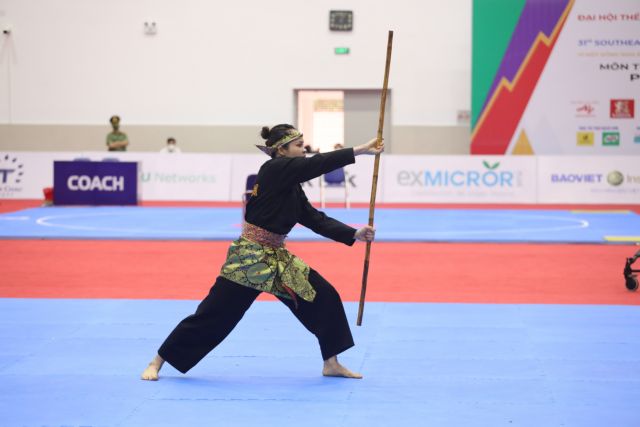 Singapore’s Muhammad Iqbal Abdul Rahman Bin made his best performance with 9.96 points, ahead of Indonesian Asep Yuldan Sani, who achieved 9.95 points in the qualifying round.

In the women’s division, Indonesia’s Puspa Arum Sari beat Malaysian Nur Syafiqah Hamzah in the women’s single’s tunggal as she took 9.95 points, while the Malaysian got 9.9.

Lao Poukky Salermbubpha did better in the women’s single tunggal with 9.9 points, higher than Singapore’s Siti Nazurah Mohd Yusoff Binte who only gained 9.42. 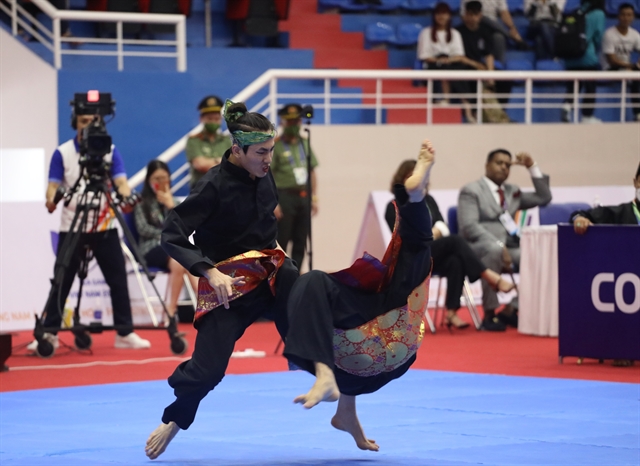 Bình earned 9.945 points for her performance, while Anisah Najihah Abdullah got 9.915.

Vietnamese Trần Danh Đức and Lê Hồng Quân got 9.945 points in the event in performance, with Indonesia’s Haidir Agung and Dede Setiadi on 9.895.

Artists continued the semi-final of the men’s and women’s seni regu (team/trio).

Pencak Silat martial artists from regional countries will compete for 16 medal sets including 11 men’s and five women’s events on May 10-16.

Tough opponents Indonesia will also set their golden hopes on Pencak Silat, a sport where they won two golds, three silvers and two bronzes in the previous SEA Games in the Philippines.

Singapore will have eyes on their world champion Iqbal Abdul Rahaman who bagged five gold in the Asian Championship. He will try to win a gold in the SEA Games 31 in Việt Nam to add to his gold medal collection.