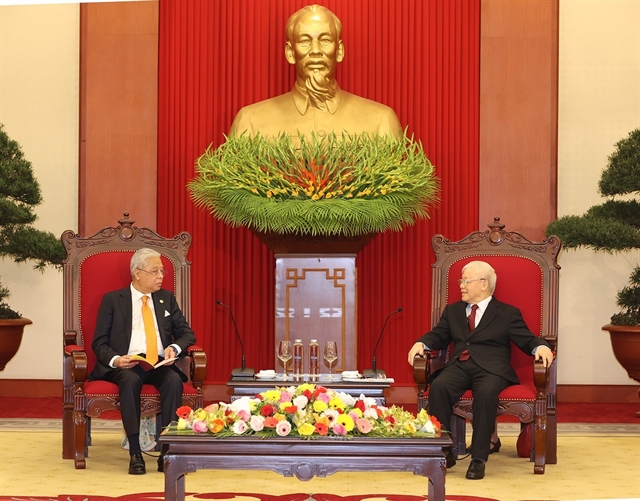 The Malaysian PM congratulated Việt Nam on its recent achievements in socio-economic development, especially in the fight against COVID-19 and economic recovery.

He stressed that Malaysia attaches importance to its strategic partnership with Việt Nam, adding his country hopes the two sides will strengthen links in economy, trade, investment, and people-to-people exchange, and that it is ready to step up tourism and maritime cooperation to tap into potential of both nations.

General Secretary Trọng described the Malaysian PM’s official visit to Việt Nam as a milestone helping promote the traditional friendship, mutual trust, and strategic partnership between the two countries in all fields in a result-oriented manner.

He asked to bring into play the obtained outcomes, improve the effectiveness of cooperation mechanisms, including relations between their political parties, step up bilateral connections as well as cooperation within ASEAN and regional and international forums.

Regarding the East Sea, the Party leader suggested Việt Nam and Malaysia jointly and actively consolidate peace and cooperation in order to ensure the rights and legitimate interests of the parties under the 1982 United Nations Convention on the Law of the Sea (UNCLOS).

He recommended the two countries to increase maritime cooperation in different fields, thereby maintaining peace, stability, cooperation, and development in the region.

At a meeting with President Nguyễn Xuân Phúc, Malaysian PM Ismail Sabri expressed delight to witness the great achievements made by Việt Nam in socio-economic development as well as COVID-19 prevention and control.

President Phúc stressed that the Malaysian PM’s visit will create a new motivation to develop the strategic partnership. He congratulated Malaysia for keeping the GDP growth rate of 3.1 per cent in 2021 and reopening international tourism from April 4. He said he believed that the Government of Malaysia will successfully implement its 12th five-year plan, bringing Malaysia to become a high income country by 2025 with increasing role and position in the world.

He appreciated the results of talks held between PM Chính and Malaysian PM Ismail Sabri and the signing of coooperation agreements, helping to create more legal basis for bilateral ties.

He proposed the two countries tap into the advantages of the free trade agreements of which they are both members and promote cooperation in building a circular economy framework within the ASEAN Economic Community for recovery and development.

Based on the huge potential between the two countries, they agreed to seek new fields of cooperation and strive to increase the two-way trade turnover.

President Phúc said the two countries should continue supporting each other and cooperating at regional and international forums and work with other ASEAN countries to build an ASEAN community of strong development and prosperity.