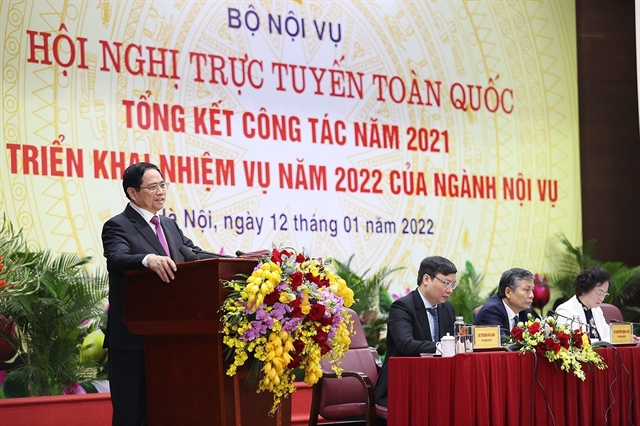 HÀ NỘI — The Ministry of Internal Affairs reduced the number of civil servants nationwide by 10.1 per cent in 2021, for the first time exceeding the Politburo’s target.

This was one of the most outstanding achievements that came to light at the ministry’s online conference on Wednesday, reviewing performance in 2021 and setting out tasks for 2022.

According to the ministry, about 8.94 per cent of commune-level officials and civil servants were made redundant in 2021.

As of the end of 2021, the number of part-time officials working at commune, village and residential levels reduced by 49.25 per cent compared to 2015.

The Ministry of Internal Affairs has offered consultations to authorities at all levels to approve an additional 27,850 teachers to localities, as required by the National Assembly.

Thanks to the efforts of the ministry, 100 per cent of administrative agencies have received and handled documents online.

The ministry has reviewed and removed required certificates of foreign language, computer and other training certificates for public employees and civil servants, receiving public support.

PM Chính said the functions and responsibilities of the internal affairs ministry in 2022 would be important and sensitive because the work is related to personnel.

He urged the sector to compile criteria and procedures for its work and make a contribution to finalising mechanisms.

He also asked the ministry to issue policies to attract talented people, build a streamlined apparatus with working efficiency and continue to make administrative procedure reforms.

He told the sector to strengthen Party building, along with preventing moral decline, ideological deviation and lifestyle problems, as well as fighting against corruption, wastefulness and negativity among cadres, civil servants and public employees. — VnExpress News