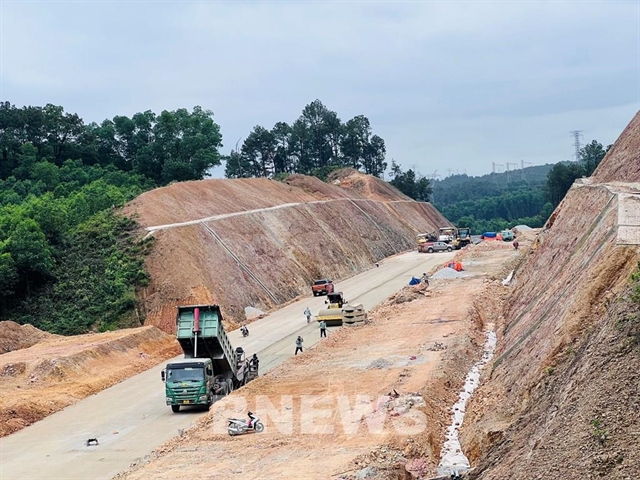 HÀ NỘI ­— The North-South Expressway projects for 2017-20 are standing at risks of shortage of 6.53 million cu.m of soil for the roadbed, according to the Ministry of Transport.

The Ministry of Transport and the management boards of projects have been coordinating with relevant ministries, branches and localities to solve the problem.

Specifically, the component project of Mai Sơn – National Highway 45 in Ninh Bình Province lacks 0.7 million cu.m of soil. The Ninh Bình authority is considering granting two additional land mines in Dương and Lang hills as per contractors’ request to meet the demand for soil, which is expected to be finalised in April.

For the component project of Nha Trang – Cam Lâm in Khánh Hoà Province, the amount of soil needed is 0.8 million cu.m. Currently, the project’s businesses are co-operating with the local authorities to complete the procedures for licensing two mines in Suối Tân and Cam An Bắc communes.

The People’s Committee of Ninh Thuận Province agreed with the project contractors to exploit 2 million cu.m of soil in Phước Hữu and Phước Vinh mines, and the remaining 0.3 million cu.m would be soil from excess land in agriculture. The shortage of soil will be addressed in March, as planned.

For the amount of soil shortage in the component project of Vĩnh Hảo-Phan Thiết in Bình Thuận Province, the contractors would be allowed to exploit soil in four mines with a total reserve of 1.7 million cu.m.

According to vice director of the Bình Thuận Department of Natural Resources and Environment Phan Thị Xuân Thu, the provincial People’s Committee agreed to grant licences for exploiting soil in two mines for the Vĩnh Hảo – Phan Thiết road section.

The procedure of granting a licence to Hải Đăng Stock Company to exploit 370,000cu.m of levelling materials will be completed by the end of this month.

Thus, the demand for soil for the Vĩnh Hảo- Phan Thiết Project was solved.

However, according to a contractor of the Vĩnh Hảo – Phan Thiết project, after being granted a licence for soil exploitation, it will take several days to complete procedures to get soil from mines to the road for construction.

Although the soil exploitation in Sông Khiêng Mine in Bắc Bình District was granted a licence earlier in March, procedures still have not been completed to take the soil out of the mine for highway construction, the contractor said.

The total demand for earth filling materials at the North-South Expressway Project 2017-2020 was estimated at 72 million cu.m per day, in which the volume of soil material utilised from the excavation is about 18.5 million cu.m, and the amount taken from land mines is about 53.5 million cu.m. — VnExpress News