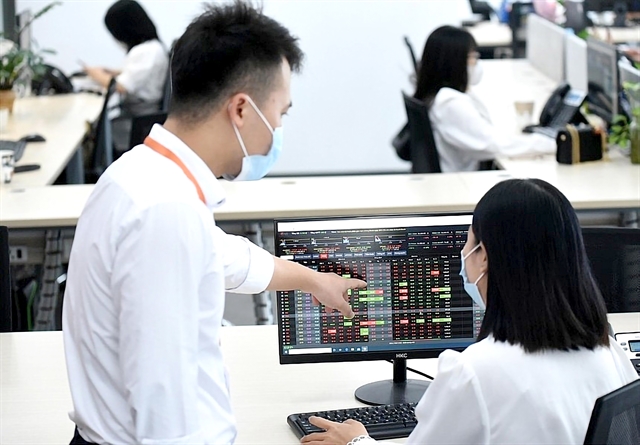 HÀ NỘI —  The global market’s attention in the next one to three months will be the speed in policy tightening by the US Federal Reversal and Vietnamese business outlook in that environment, SGI Capital said in a recent report.

The Fed’s policy change has been widely expected since the second half of 2021. After official data showed that the US unemployment rate dropped to 3.9 per cent while inflation hovered at 7 per cent, the market has priced in the reduction of its balance sheet and five rate hikes in 2022.

The US market, then, has experienced strong corrections with the S&P 500 losing 12 per cent from its peak before recovering, while the Nasdaq fell nearly 22 per cent.

Some other stock markets also saw big drops such as South Korea’s KOSPI plummeting 21 per cent from its peak in July 2021, three months before the Korean Central Bank raised interest rates. Meanwhile, Japan’s Nikkei index fell 15 per cent since its central bank began to cut its balance sheet in September 2021.

SGI Capital believes that the US economy has recovered strongly and there are signs of fast growth in some manufacturing industries, leading to a rapid improvement in employment. Therefore, the Fed has announced the withdrawal of support measures to avoid hot growth spreading to service industries, which will have a strong impact on long-term inflation.

Although the US stock market value is still high compared to the 5-year and 10-year averages, the repurchased volume of treasury shares by large enterprises has created a strong division in the market.

On the other hand, in the previous rate hike cycles, emerging economies with expectations of rapid growth had attracted many indirect capital inflows to take advantage of the difference in interest rates.

However, once the Fed starts raising rates, the flows reverse course, resulting in instabilities in exchange rates and interest rates.

In this cycle, on the contrary, in 2021, many major central banks raised interest rates ahead of the Fed, while there were no capital flows into emerging markets to take advantage of rate differences. Therefore, its indirect impact on investment cash flows will be small, and differences in each country’s bases are significant.

Basically, the US economy has entered the self-healing phase without the support of the Fed. The rates’ gap between the high-risk businesses and the risk-free interest rates began to widen, showing the financial market is no longer in a state of excess liquidity. Shares’ performance will be divided depending on the story of each stock, it is no longer in sync with the whole market’s or industry’s trend.

According to SGI Capital, the country’s economy is still at the beginning of recovery, out of phase with China and the US.

Retail sales, which just set a bottom, have shown signs of stabilising, but are still too far from the pre-pandemic level. This is also one of the key reasons why domestic production has not been able to recover strongly, leading to ongoing weak credit demand.

With the budget surplus in January and the National Assembly’s 2022 budget deficit target set at no more than 4 per cent of GDP, government bond yields will not be able to climb sharply.

Rate hike pressure will rise when the economic recovery momentum spreads from FDI enterprises, domestic production, retail consumption to public investment disbursement with the most obvious sign being good credit growth in many quarters.

No room for easy money flow and wild expectations

SGI Capital believes that amid the circumstances, business plans to take advantage of the recovery of the Vietnamese economy and the global opening will be in focus in the first and second quarter of 2022.

From now until the General Meeting of Shareholders’ season, information about the business plans of enterprises will attract cash flow attention.

At the end of the second quarter, the market will assess the pressure of asset tapering by Fed and other central banks, as well as interest rate hikes at the end of the year in Việt Nam. This could be the reason for the strong fluctuation in the stock market.

SGI Capital said that in 2022, there is no room for easy money flow and wild expectations. Positive movements of stocks with good fundamentals and attractive valuations in the first weeks of the new year are showing the return of investment cash flow. — VnExpress News