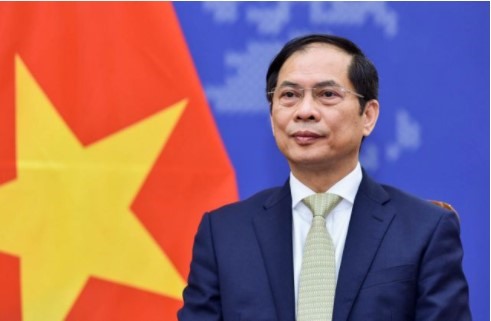 Minister of Foreign Affairs Bùi Thanh Sơn spoke to the media about Việt Nam’s successes and imprints at the United Nations Security Council (UNSC), which affirmed the sound Party and State’s policy of upholding multilateral diplomacy.

During more than three years of implementing Directive 25, multilateral diplomacy has been strongly and synchronously deployed and reached many important milestones. We have completed many important international responsibilities such as being a non-permanent member of the United Nations Security Council (UNSC) for the 2020-2021 term, Chair of ASEAN 2020, successfully organising many major international conferences such as the 2018 World Economic Forum (WEF) ASEAN Summit, the 2019 US-North Korea Summit, as well as continuing to make active contributions to all important multilateral forums.

In addition, we have been elected with a high number of votes to many prestigious organisations and agencies of the United Nations such as the International Law Commission, the Board of Governors of the International Atomic Energy Agency, the UNESCO Executive Board, the Postal Operations Council of the Universal Postal Union.

These outstanding results have contributed to the overall achievements of Việt Nam’s foreign policy after 35 years of renovation, contributing to the establishment of an international position and prestige that our country has never had as it does today.

Could you please access the review of the outcomes that Việt Nam has achieved during the term of a non-permanent member of the UN Security Council 2020-2021?

Firstly, in the process of joining the Security Council, with direct participation of Party and State leaders, we have conveyed a strong message about a renewed and transformed Việt Nam. The country has its own capacity, courage and identity; has a strategic vision for the world and the region, and has an independent foreign policy.

Secondly, we have made substantive and practical contributions to the common work of the Security Council, demonstrated by participating in discussions and finding solutions to all issues on the Security Council agenda in all regions, from conflicts in Africa to the humanitarian crisis in the Middle East, as well as on important topical issues such as countering the proliferation of weapons of mass destruction, protecting civilians in armed conflict, maritime security, climate change, or response to the COVID-19 pandemic.

At the same time, Việt Nam also has a reasonable, compassionate, responsible and humane way to solve the problems arising, creating a favourable atmosphere for exchange views at the Security Council.

Thirdly, we have made our mark with a comprehensive approach to international peace and security issues. Việt Nam’s proposals have received great response from UN member states.

For example, the open discussion session on the UN Charter held in January 2020 on the occasion of the 75th founding anniversary of the United Nations witnessed the participation and speech of 110 representatives of countries and organisations, a record number for a Security Council meeting.

The Resolution proposed by Việt Nam on protecting essential infrastructure for the people is one of the rare (only about 1 per cent) UN resolutions co-sponsored by all 15 members of the Security Council.

We also affirmed Việt Nam’s position and prestige as a faithful friend, reliable partner, active and responsible member of the international community, receiving the sympathy and support of all countries in the UN Security Council and international friends.

With the success of the tenure as a non-permanent member of the Security Council along with other important foreign affairs achievements, the international community have been increasingly holding trust that Việt Nam would continue to make more important contributions to solving global and regional problems. 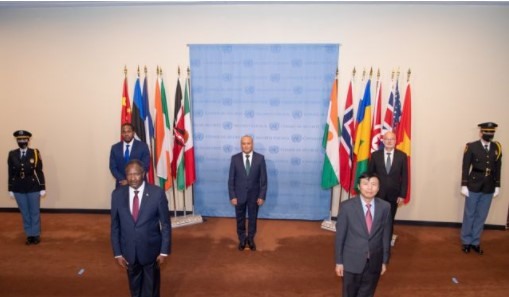 On December 31, 2021, the lowering of the flags ceremony was held  at the UN headquarters in New York to mark the conclusion of two-year tenures on the UN Security Council of five countries: Estonia, Niger, Saint Vincents & the Grenadines, Tunisia, and Việt Nam. VNA/VnExpress News Photo

What are the reasons for these successes? What lessons can we learn for the implementation of multilateral diplomacy in the future?

The success of the past term as a non-permanent member of the UN Security Council is a combination of many objective and subjective factors.

First of all, it is thanks to our steadfastness in the foreign policy of independence, self-reliance, multilateralisation and diversification; the close leadership and direction of the Politburo, the Secretariat and the leaders of the Party and the Government; close coordination and active participation of ministries and branches in the Inter-agency Working Group on the UN Security Council, organisations in the political system; wide international support, especially important partners and traditional friends.

Taking on the role of a non-permanent member of the UN Security Council in the past two years as well as in the time to come, we have learned many valuable lessons and experiences.

The first lesson is on properly handling the relationship between independence, self-reliance and solidarity, international cooperation, between national interests and international obligations and responsibilities on the basis of principles of the UN Charter and international laws.

In all international issues at the UN Security Council, especially those where many countries have different opinions, we have always been steadfast in our independence and self-reliance for the sake of the nation’s interest while at the same time actively contributed responsibly to promoting international solidarity and cooperation with the spirit of respecting international law, peace, democracy and progress in the world.

The second lesson is on promoting the diplomatic tradition of peace and humanity of the nation and Hồ Chí Minh’s diplomatic mindset.

We are always steadfast in our principles and strategic goals, but also are flexible, reasonable, and sensible on different issues, different points of time and different partners. We always try to be a friend, a reliable partner, an active and responsible member with all countries in the international community.

We always make decisions basing on the common interests of the international community, maximise the common ground, and harmoniously handle the concerns of relevant countries on the basis of equality and mutual benefit on issues proposed at the UN Security Council such as: peacekeeping, post-conflict reconstruction, disease prevention, sustainable development.

The third lesson is on the skilful combination between position and power, between multilateral and bilateral, between global and regional, between political diplomacy and economic diplomacy, cultural diplomacy.

A highlight in the last term is that we have very well promoted our role as a bridge in a number of global and regional issues, especially in promoting cooperation between the UN and ASEAN when Việt Nam assumes the chair of ASEAN 2020 and the President of the UN Security Council in April 2021.

The last lesson is about taking care of building a quality team of foreign affairs staff and those specialised in multilateral diplomacy.

Joining the UN Security Council is participating in a difficult and complex “play of mind” on a global scale, requiring a contingent of multilateral foreign affairs officials who have the courage, intelligence, capacity and qualifications to reach the global level. VnExpress News