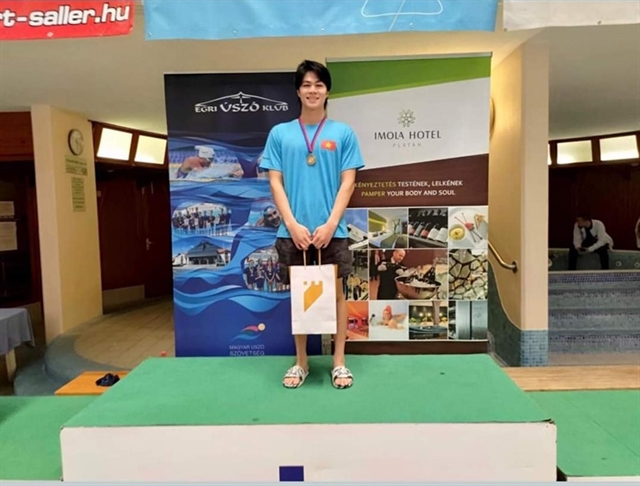 HÀ NỘI — Trần Hưng Nguyên set a national record in the men’s 400m individual medley event during a tournament in Hungary on Monday.

His result is close to the 2018 Asian Games’ top three. Wang Shun of China took the bronze with a time of 4:18.67 in Jakarta, Indonesia.

It is the second national record that he set within three months. Earlier, during the first trip to Hungary in late December, Nguyên set a new height in the 200m backstroke with a time of 1:57.72 in the short course (25m) pool during the World Swimming Championship in Abu Dhabi, the UAE.

Nguyên and his eight teammates are in an intensive training course in Hungary in preparation for their 31st SEA Games in May in Việt Nam.

They took part in the Eger Cup and even commemorated Hungarian swimmer Aladár Bitskey, at the weekend.

Among them, swimmer Nguyễn Huy Hoàng made a double in the men’s 400m freestyle and 200m butterfly, and Phạm Thanh Bảo grabbed a hattrick in the men’s 50m, 100 and 200m breaststrokes.

Việt Nam Team will practise in Hungary until April 24 and return home to compete at the SEA Games from May 14-19. The hosts will send 32 athletes to participate in all 40 events at the Mỹ Đình Aquatic Sports Palace, expecting six to eight gold medals and second place in the overall ranking.

After the SEA Games, the best athletes will enjoy another training course in Europe to prepare for the Asian Games in Hangzhou, China, in September. — VnExpress News