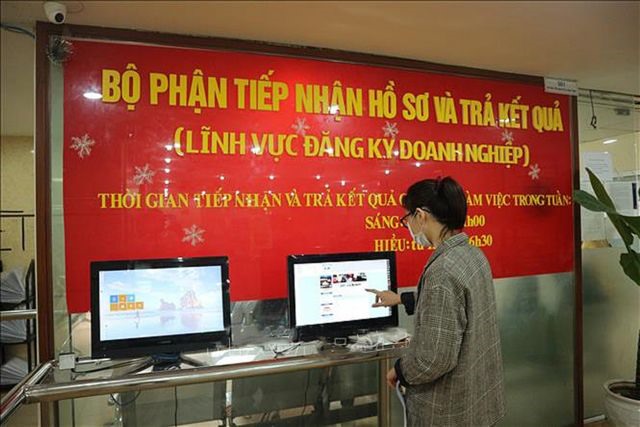 HÀ NỘI — The number of newly-established enterprises in the first five months of the year was 62,961, up 12.9 per cent over the same period in 2021, according to the General Statistics Office (GSO).

This was the highest number ever for the first five months of the year, the GSO said.

In the first five months of this year, newly registered capital reached about VNĐ761 billion, down 2.2 per cent over the same period in 2021.

Therefore, the total registered capital of the economy in the first five months was more than VNĐ2.4 trillion, up 39.5 per cent on the year.

The GSO reported that Việt Nam saw 98,600 newly established enterprises and enterprises resume operations in the first five months of this year, up 25.8 per cent over the same period last year.

The numbers showed a substantial recovery of enterprises in the first five months.

The GSO said in May, Việt Nam had 13,400 newly established enterprises, down 10.9 per cent compared to the previous month but up 15.2 per cent over the same period last year.

There were 5,207 enterprises resuming operation, down 26 per cent from the previous month and up 6.4 per cent over the same period in 2021.

At the third session of the 15th National Assembly, Deputy Prime Minister Lê Văn Thành said Việt Nam had made very positive changes in its socio-economic development in the fourth quarter of 2021, but the strong impacts of the pandemic meant demand in the economy did not recover strongly in the short term.

Therefore, it is necessary to quickly and efficiently implement the socio-economic development and recovery programmes to return the economy to normal.

The economy initially showed a recovery, while production and business activities have been forecast to prosper. This accelerated economic growth in the second quarter, and the whole year of 2022 will see enhanced economic growth.

The total tax collection in the first five months of this year is estimated at nearly VNĐ673 trillion (US$28.8 million), equivalent to 57.3 per cent of the projection for the whole year and a year-on-year increase of 16.5 per cent, according to the General Department of Taxation.

Notably, the collection from the manufacturing and business sector, the biggest contributor to the domestic revenue, represents 54.7 per cent of the estimate for the year, up 11.5 per cent from the figure of the last year’s corresponding period.

The positive results were attributed to the fact that the economy in the first months of the year maintained a good growth rate, the COVID-19 pandemic was kept under control, while production and business activities were on the recovery. The strengthening of examination and inspection to prevent tax loss and evasion as well as efforts to reduce the tax debt rate also contributed to increasing the revenue for the State.

The general department has ordered oganisations under its wings to implement tax support solutions in line with a resolution of the National Assembly which aims to help enterprises and residents quickly resume their production and business.

They were also requested to continue administrative procedure reforms relating to tax and e-invoice nationwide to facilitate taxpayers. The implementation of the second phase of e-invoice will be promoted across the country, along with the sharing of its information and data in the provision of online public services, it said. — VNS