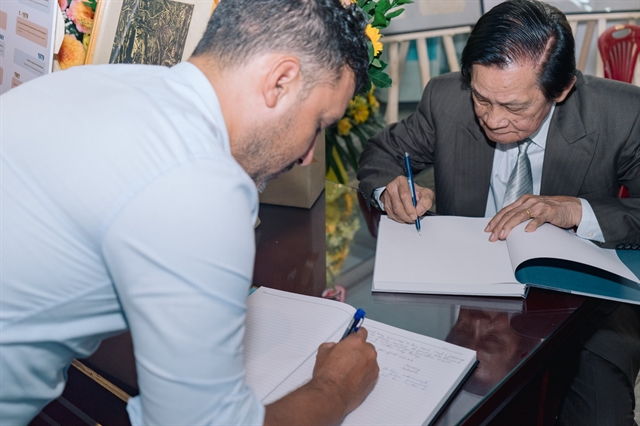 HCM CITY — A photo book outlining the work and career of 83-year-old artist Trang Phượng, a founding member of the HCM City Fine Arts Association, has just been released.

It consists of 100 sketches of actual happenings on battlefields in the South during the resistance war against America as well as portraits of his comrades.

The publication also has pictures of 70 oil on canvas and watercolour paintings capturing the lives of people and soldiers during times of war and peace in Việt Nam.

It highlights the history of the Department of Liberation Arts (currently the HCM City Fine Arts Association) which was founded by Phượng and leading painters Cổ Tấn Long Châu and Phạm Minh Sáu in 1962.

The department was founded with the mission of training painters and capturing actual happenings on battlefields in the South.

In 1981, the HCM City Fine Arts Association was established with a mission to support the city’s artists and introduce their works to the public. Its main members were Phượng, Quách Phong and Huỳnh Phương Đông.

Sketches and paintings on the life of people and soldiers by Trang Phượng. Photo courtesy of the museum

To celebrate the release of Phượng’s book, an exhibition has been held at the HCM City Fine Arts Museum.

Sculptor Nguyễn Xuân Tiên, chairman of the city Fine Arts Association, said “Through Trang Phượng’s book and this exhibition, the audience, particularly young people, can understand more about the resistance war in the South.

“Painter Trang Phượng was not only a soldier-painter fighting at different battlefields in the South but also a critic and author of many articles on fine arts.”

Phượng, whose real name is Trương Bá Phạn, was born in 1939 in Bình Dương Province.

He graduated from the Bình Dương Fine Arts College in 1956 and joined the military later.

In 1971, he went to Hà Nội and graduated from the Hà Nội Fine Arts University two years later.

He also obtained a PhD from the National Academy of Arts in Sofia, Bulgaria in 1979.

He worked at the Ideology – Culture Department of the HCM City Party’s Committee from 1983 to 2005.

In 2010, he hosted his first solo exhibition at the city’s Fine Arts Museum. — VNS