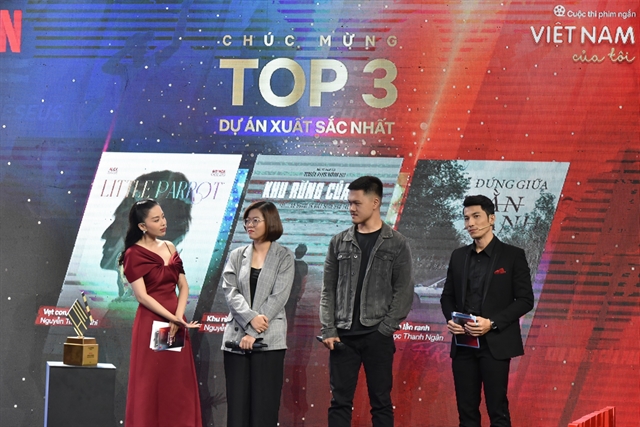 The winning films were announced in an award ceremony on May 23 2022, live-streamed on Yeah1’s Facebook channel. — Photo Netflix

Over 100,000 viewers tuned in to the highly-anticipated award ceremony, live-streamed on Yeah1’s Facebook channel, on May 23.

The First Prize was granted to Páo’s Forest (Khu rừng của Páo) by Nguyễn Phạm Thành Đạt. The film tells the story of Páo, a Mông man who married at 14. At the age of 18, he falls in love for the first time, forcing him to choose between love and family responsibilities. The project was filmed over one month in Mộc Châu Town of Sơn La Province, and all of the film’s actors are from the Mông ethnic group.

The Second Prize went to Little Parrot (Vẹt con) by Nguyễn Trần Ái Nhi. In Little Parrot, Erik, a German man, meets with Thu, the mother of his deceased lover, Minh. Thu wants to bring Minh’s ashes back to Việt Nam, but Erik is not ready for that just yet.

Conceptualised in early December last year, pre-production for the film took place from mid-February to the end of March this year. The film was shot over four days in Berlin, Germany. An international cinema, its production team comprises Vietnamese and German crew members, with three languages used on the set: English, Vietnamese and German.

The third prize was given to Between the Lines (Đứng giữa lằn ranh) by Phan Ngọc Thanh Ngân.

A man is joined by mysterious hitchhikers and strangers while on a taxi ride to meet his family. Over four days, the film was shot in Củ Chi District, HCM City.

“I decided to enter the “My Vietnam” short film competition because it came at the right time. It was the time when my friend, Phá, came to me and shared his personal and family life, as well as the customs of the Mông community and the challenges that Phá faces,” said Nguyễn Phạm Thành Đạt, creator of Páo’s Forest.

The Ministry of Culture, Sports and Tourism Department of Film deputy director Lý Phương Dung said: “I appreciate the projects by all the Vietnamese talent, in the country and abroad, who have participated in the ‘My Vietnam’ short film competition, powered by Netflix’s Cinema Beauty – Vietnam Creative Economy Grant.”

“I’ve seen in these projects the beauty of creativity, enthusiasm and professionalism. These projects bring a subtle discovery of life and tell the stories of Vietnamese people today — the customs, habits, and cultural traditions of Vietnamese living in Việt Nam and abroad, the disadvantaged people in society, nature and our environment. Each project proves the great love these aspiring filmmakers have for the nation and Vietnamese people.”

Amy Sawitta Lefevre, Netflix Head of External Affairs, APAC, said: “We are delighted to announce the top three winners of the competition. These are stories by talented Vietnamese filmmakers from Việt Nam and about Việt Nam, and I could not be prouder to view these beautiful films that say so much about the rich culture and history of the beautiful place that is Việt Nam.”

First launched in October 2021 with the Ministry of Culture, Sports and Tourism support, the grant marks Netflix’s first Creative Economy Grant in Việt Nam to support the country’s creative economy and Vietnamese filmmakers from underrepresented groups, creating more opportunities for their voices to be heard. — VNS