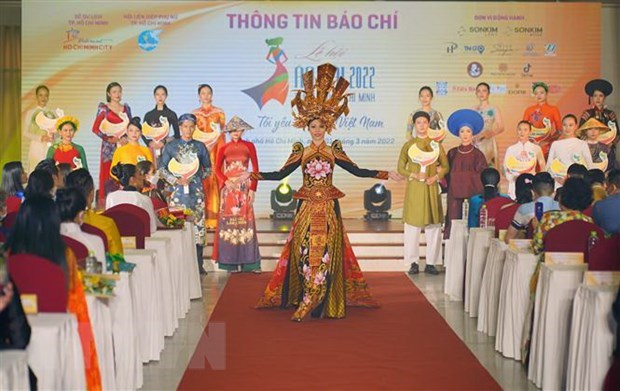 A national dress show at a press conference held to announce that the Áo Dài Festival will be held in HCM City from March 5 to April 15. VNA/VnExpress News Photo

The municipal Department of Tourism announced the month-long event (March 5 – April 15) at a press conference.

This year, the festival themes will reflect human values and love for Vietnamese traditional dresses while promoting the city’s image as a safe, friendly and attractive destination for tourists.

Lê Trương Hiền Hòa, deputy director of the tourism department, noted that the event was taking place in the context of socio-economic recovery in new normal conditions; therefore, the messaging was important.

The festival’s opening ceremony will treat the public to a display of more than 300 áo dài models from 15 outstanding collections by local designers.

A wide range of cultural activities including an áo dài parade themed ‘Aspiration for Peace’, art performances, an áo dài exhibition, a drawing contest called ‘Áo Dài and Flowers’, and an áo dài design competition, among others.

The festival aims to highlight the beauty of Vietnamese traditional dresses a different periods in time.

The opening ceremony will be organised at the President Hồ Chí Minh Statue Park on Nguyễn Huệ Street in District 1 on March 5 and broadcast live on HCM City Television’s HVT1 channel.

Within the framework of the festival, many tourist sites in the city will offer entrance fee discounts for visitors wearing the áo dài.

Local authorities are also encouraging people working in district administrations, government agencies, schools and universities throughout the city to wear the áo dài during March.

First held in 2014, the Áo Dài festival is organised annually in March. Among other things, it is also expected to help attract more tourists to the city. VnExpress News