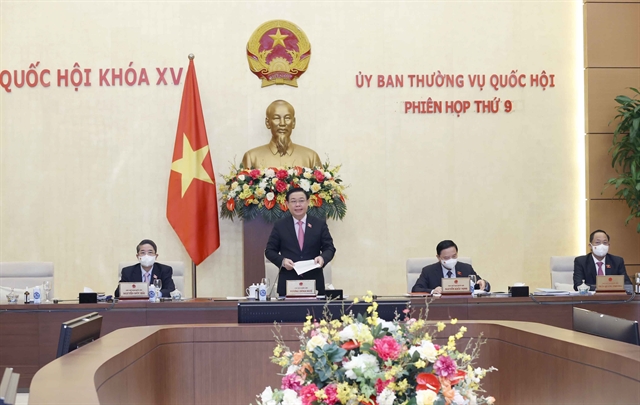 Among socio-economic issues on the agenda, it will consider supplementing the 2020 and 2021 foreign non-refundable aid to the State budget estimates.

Besides, legislators will also look into the specialised supervisory teams’ reports about the implementation of regulations on rearranging district- and communal-level administrative units, settlement of complaints and denunciations, along with thrift practice and wastefulness prevention.

Chairman Huệ said the Government directed relevant agencies to carefully prepare documents relating to draft laws to be submitted to the NA Standing Committee for discussion.

The building of these draft laws is aimed at institutionalising and concretising Party policies and guidelines; ensuring the consistency of the law systems and meeting requirements of digital transformation and digital economy, he said.

The draft law amending and supplementing some articles of the Law on Radio Frequency discussed at the meeting before submitting to the NA for approval is a step towards implementing the policy to develop the digital economy with the target of having the digital economy accounting for at least 20 per cent of the total GDP of the economy during this term, the chairman said.

The collection of opinions and adjustment of draft laws discussed at the meeting were carried out carefully on the basis of comprehensively considering and assessing impacts of policies and meeting the reality’s demand, according to the chairman.

He noted that compiling agencies need to be more proactive in implementing their law-building tasks and could organise extraordinary NA meetings to review and approve urgent draft laws if needed.

Regarding the supervision tasks, Chairman Huệ said the NA Standing Committee will organise a question and answer session with NA deputies.

Progresses in previous Q&A sessions affirmed that this is an effective supervision activity of the NA, meeting demand and aspiration of people and voters as well as requirements of building the rule-of-law socialist State of the people, by the people and for the people, he said.

The Q&A session will take place on March 16 and be connected with all the 63 NA deputies’ delegations nationwide via videoconference. It will also be broadcast live on the channels of the Vietnam Television, Radio the Voice of Vietnam, and the NA Television.

It will focus on issues related to industry, trade, and the natural resources environment.

At the morning session on Thursday, participants discussed the draft Ordinance on the process and procedures to send drug users aged 12-18 to compulsory rehabilitation centres. — VnExpress News