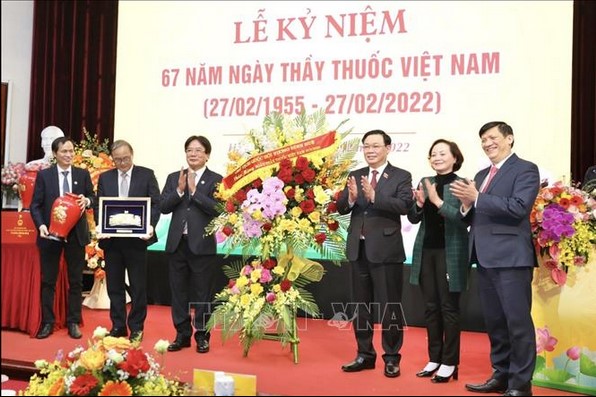 The hospital, also known as Vietnam-Germany Friendship Hospital, was established in 1906 with its original name of Phủ Doãn Hospital. The 1,500-bed hospital is now a leading medical treatment, training and research facility of Việt Nam, employing more than 2,500 doctors, nurses and medical workers.

Extending greetings to doctors, scientists and medical workers nationwide and at VDUH on the special occasion, NA Chairman Huệ hailed their contributions to the protection of public health over the years.

The medical service coverage index of Việt Nam has reached 70 out of 100 points, higher than the average level in the region (61 points) and the world (67 points), he said, adding that Việt Nam had met the goal of vaccinating 70 per cent of the population earlier than schedule by six months and become one of the six countries with highest COVID-19 vaccination coverage in the world.

The number of medical workers also rose from 300 to more than half of a million currently.

Over the past 10 years, 106 medical scientists have been awarded the title of professor, while 801 others have become associated professors.

So far, Việt Nam has mastered the technologies and techniques of transplanting all six internal organs.

Alongside, Việt Nam has produced 11 out of 12 kinds of vaccines.

The top legislator underlined that over the recent three years combatting COVID-19, the contributions that medical workers, including those from the VDUH to the protection of public health were uncountable. In the fourth wave of COVID-19 from April 2021 alone, more than 25,000 professors, doctors and medical students came to pandemic-hit localities to support them in the COVID-19 fight, he said, noting that about 3,000 medical workers were infected with COVID-19 and more than 10 died.

Việt Nam was one of the first four countries to successfully isolated SARS-CoV-2 virus, he said, adding that the country was working hard to receive COVID-19 vaccine and treatment drug technologies.

He asked the health care sector to focus more on personnel training and scientific research. He requested the Ministry of Health to give advice to the NA Standing Committee on adjustments and supplements to the revised Law on Medical Examination and Treatment and the revised Law on Health Insurance to complete the institution for the sustainable and healthy development of the sector.

The Party, State, NA, Government and local authorities would create optimal conditions for the health care sector to develop to better protect people’s health, he underlined.

On the occasion, NA Chairman Huệ visited and presented gifts to some patients taking treatment at the hospital. VNA/VnExpress News