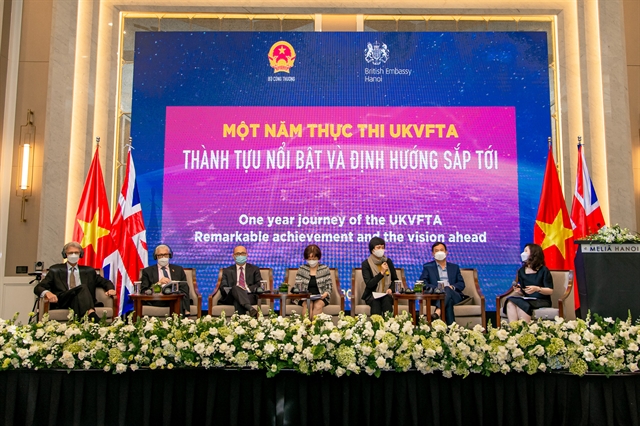 On Tuesday a seminar was held to review bilateral trade between Việt Nam and the UK one year after the UKVFTA came into force. Photo bnews.vn

HÀ NỘI — The UK-Việt Nam free trade agreement (UKVFTA) is like a two-lane freeway that helps balance the direction of bilateral trade, according to Deputy Minister of Industry and Trade (MoIT) Trần Quốc Khánh at a seminar on Tuesday.

Khánh said although UKVFTA took effect at a time when the pandemic was ravaging the two countries, bilateral trade still hit US$6.6 billion, up 17 per cent compared to 2020.

Vietnamese exports to the UK grew by over 16 per cent, with an increase of 24 per cent in the other direction.

Notably, 48 UK direct investment projects in Việt Nam were approved in 2021, with total registered capital of $53 million, up 157 per cent year-on-year.

He admitted that room for bilateral trade growth is still ample, thanks to the FTA.

“The agreement will open up more opportunities for the two countries to cement cooperation and rely on each other’s strength, adding more value to bilateral trade,” said the deputy minister.

He revealed that the UK had recently secured a UK-linked offshore wind development project in Việt Nam. Once completed, the wind farm would generate enough electricity for 1.6 million homes.

The UK is also supporting MoIT in building a national trade model to help Việt Nam comply with ASEAN commitments and improve ease of doing business and trade.

Additionally, an English guidebook has been released to explain the FTA to any UK business looking to expand its trade to the country.

Lương Hoàng Thái, director of Multilateral Trade Policy Department under MoIT, said that in the past, the UK had to support Việt Nam’s exports through a Generalised Scheme of Preferences.

Now, the UKVFTA is a mutual agreement bringing bilateral trade to the next level.

He also said that the UK has been assisting Việt Nam in developing an ASEAN-standard commercial portal on which information related to FTAs could be uploaded.

The director also said there was still plenty of room for trade growth since several industries haven’t made the most out of UKVFTA, including rice and seafood.

“In the short-term, both sides are going to hold the first meeting to review the one-year implementation of UKVFTA and propose amendments to the agreement if necessary,” the director added.

Đinh Cao Khuê, vice president of Vietnam Fruit and Vegetable Association, said that Vietnamese fruit and vegetable firms had prepared themselves for trade integration for many years.

Notably, they have developed growing regions, invested in cutting-edge machines, and trained farmers to expand their trade footprint in the UK market.

Thanks to the efforts, Vietnamese agricultural exports to the UK grew by 67 per cent in one year after UKVFTA came into force.

Director of the Center for WTO and International Trade Nguyễn Thu Trang said the UKVFTA was better than other FTAs in that it provided a five-month preparation window for Vietnamese firms to adapt to the new trade rules.

Additionally, Việt Nam normally faced trade competition from its partners under other FTAs, but such competition was absent under the UKVFTA due to the nature of Vietnamese and UK exports.

Christopher Jeffery, chairman of the British Chamber of Commerce Vietnam, said that the chamber had been hearing considerable interest from UK firms wanting to invest and do business in Việt Nam.

He said the bilateral cooperation would include finance, renewable energy, education, high-tech, fintech and many other fields.

It is also worth noting that Standard Chartered Bank is working with financially supporting Vietnamese firms.

Nguyễn Khánh Ngọc, deputy director of the European-American Market Department, said that the Ukraine-Russian conflict had driven the UK to redirect many investments to other countries.

Such redirection of capital flows will open up more trade and investments opportunities to Vietnamese firms in the future.

The signing of the UKVFTA took place on December 29, 2020, in London, with both countries temporarily applying the agreement from January 1, 2021.

It officially came into force on May 1, 2021, after each side completed domestic approval. — VnExpress News