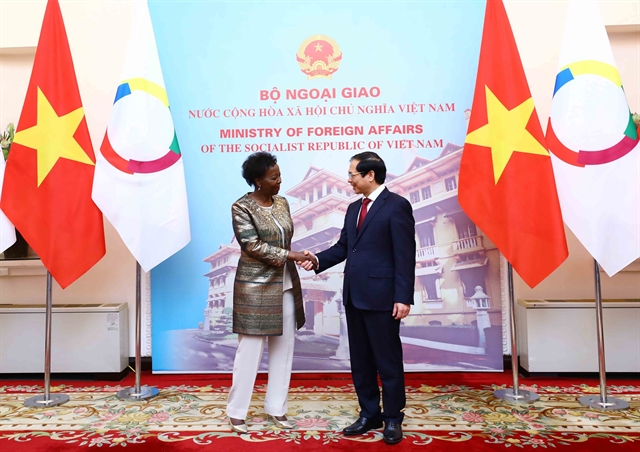 Mushikiwabo was heading a delegation to take part in the Việt Nam-Francophonie High-level Economic Summit, which aims to boost economic and commercial cooperation between the two sides.

At the meeting that took place at the State Guest House, Foreign Affairs Minister Sơn said he highly appreciated the delegation’s visit to Việt Nam, which is the first of its kind, and considered it a major milestone for collaboration between the country and the Francophone community.

The official said he was highly supportive of OIF’s efforts to increase the use of the French language, to diversify culture and high-quality education, especially its initiatives to enhance economic cooperation within the French-speaking community after COVID-19.

Sơn asserted that Việt Nam will continue its active participation in the organisation’s activities and be a responsible member. He also made specific suggestions to improve economic and commercial collaboration between the two sides, especially with the Francophone communities in Africa, and to increase the teaching of the French language and education programmes taught in French.

He asked for OIF’s support in providing professional training and teaching French to Việt Nam’s peacekeepers, and in enhancing cooperation between Việt Nam and the African Union.

He thanked the organisation for its concerns towards regional issues including those in the South China Sea (East Sea), and expressed his hope that it will amplify adherence to the fundamental principles of international law, which include the 1982 United Nations Convention on the Law of the Sea (UNCLOS).

Mushikiwabo emphasised that OIF highly respected the important role and position of Việt Nam in the Francophone community, saying the visit was only the start of a collaboration process between Vietnamese and French-speaking businesses.

She asked that the two sides come up with detailed plans to magnify the results of the visit and take their economic cooperation to a higher level.

The official said she agreed with Việt Nam’s suggestions on teaching French and increasing French-taught education, and that the organisation will support the country in its peacekeeping efforts and connections with the African Union. — VnExpress News