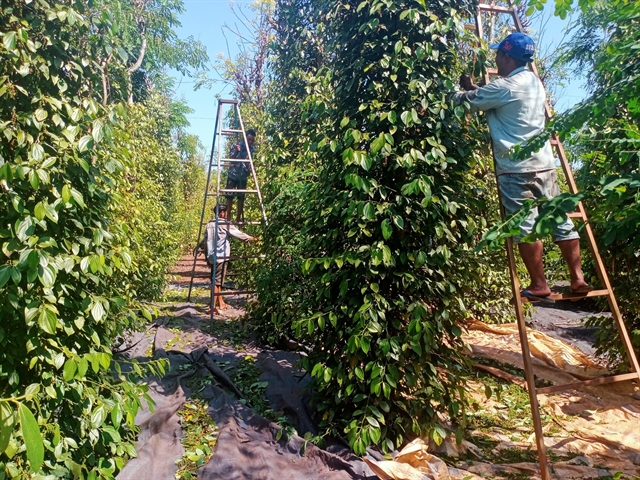 BÌNH PHƯỚC — Farmers in Bình Phước Province are getting high prices for pepper amid the ongoing harvest season but face a shortage of workers.

The south-eastern province, one of the country’s largest pepper growing areas, has nearly 16,000ha under pepper and is in the peak harvest season.

The yield has increased by 30 per cent from last year, pepper farmers said.

So he covers the ground around the plants with plastic sheets for workers to drop the pepper they pluck for collecting later, thus speeding up the harvest, he said.

Usually, when there are enough workers, the spice is collected in bags they carry, and the pepper is cleaner then, he said.

“This year the wages have increased.”

Besides wages, the farmers also pay workers additional money for fuel and refreshments to attract them.

They attribute the shortage to the fact that many workers are now busy tending their own cashew orchards. The province is the country’s largest cashew producer.

Besides, many agricultural workers have stopped working as daily labour and moved to steady jobs at businesses.

If the pepper ripens but is not harvested in time, it falls to the ground and loses quality, they said.

It is the peak ripening period and farmers should try to harvest their pepper soon, he said, warning that letting ripe peppercorns fall to the ground could only be a temporary solution because it would affect the next crop.