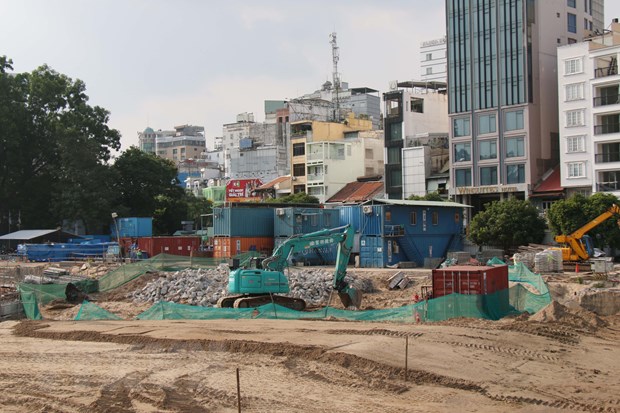 The landscape above the Bến Thành underground station on metro line No 1 being restored as the station approaches completion. VNA/VnExpress News Photo

Engineers and workers are scrambling to complete the electrical and mechanical components of the underground station and the HCM City Management Authority for Urban Railways is restoring the landscape above it.

The four-storey station, which will be 32 metres below ground, is one of three underground stations in the 19.7km line from Bến Thành Market in District 1 to Suối Tiên theme park in District 9.

It will also serve as a transfer station linking with lines Nos 2, 3 and 4 when they are built in the future.

It has six entrances, including one at the September 23rd Park in front of Bến Thành Market and Phan Chu Trinh Street next to the market.

The first floor below the ground will have a shopping area of around 45,000sq.m, a concourse, ticket vending machines, automatic toll gates, a help desk, and the station office.

The second floor will have the platforms, control office and the fire safety room, and the third will have air circulation and power supply equipment rooms and a staff lounge.

Besides restoring the landscape at street level, MAUR will also strive to complete the import of the last six of the 17 trains that will make up the rolling stock. VnExpress News