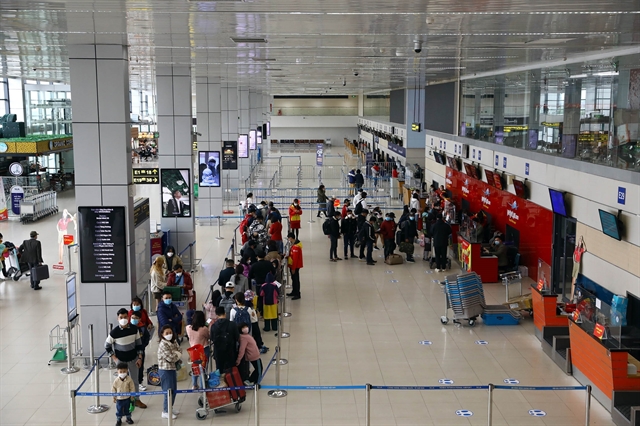 HÀ NỘI — The recent resumption of domestic and international air routes are building hope that the sector will strongly rebound this year, following a tough year for business in 2020 and 2021.

According to the Civil Aviation Authority of Vietnam (CAAV), domestic airlines operated 126,280 flights in 2021, down 41.7 per cent year-on-year, and nearly 60 per cent from pre-pandemic levels.

Regular international flights had been completely frozen since the first wave of the pandemic, except for those bringing home overseas Vietnamese, or carrying foreign experts.

The General Statistics Office (GSO), under the Ministry of Planning and Investment, said Việt Nam welcomed only 111,100 international arrivals by air last year, a drop of 96.4 per cent from the previous year.

The national flag carrier Vietnam Airlines reported an accumulative loss of VNĐ21.2 trillion (US$934.7 million) as of the end of the third quarter last year.

However, a representative from Vietnam Airlines said the carrier’s market share and revenue from cargo transport still took the lead in Southeast Asia, reaching some VNĐ8 trillion in the year, up 60 per cent from 2020.

The carrier will continue to focus on cargo transport, aiming to establish a cargo carrier in the future, the representative said.

Meanwhile, new-generation airline Vietjet reported a rise of 36.4 per cent in revenue, despite successive pandemic impacts, a silver lining of the whole sector.

In December 2021, when international flights resumed, the number of international visitors to Việt Nam expanded by 14.2 per cent from the previous month.

Experts said the Vietnamese aviation sector has surmounted the deepest point of the crisis. Domestic transport will recover to some 70-75 per cent of pre-pandemic levels, while international transport will reach 25 per cent. The figures are expected to rise higher in the last quarter of this year.

Domestic airlines plan to add 251 flights to popular routes between February 7 and 10, to keep up with an unexpected surge in travel demand after Tết, according to the Office of the Ministry of Transport.

The CAAV has requested carriers to mobilise all resources to increase flights from northern and central localities to HCM City, it said. — VnExpress News