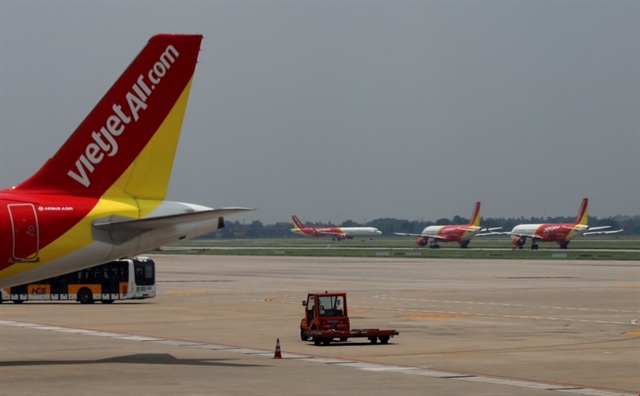 HÀ NỘI — The market ended mixed on Friday with the benchmark VN-Index falling due to weak risk appetite, while the HNX-Index extended gains for four straight sessions.

However, the market’s breadth was positive with 243 stocks increasing, while 190 stocks declined. Liquidity was also higher than the previous trade as 697.5 million shares were traded on the southern market, worth VNĐ22 trillion (US$964.2 million).

The benchmark’s reversal was mainly due to strong sell-offs in large-cap stocks. The VN30-Index, tracking 30 biggest stocks in market capitalisation on HoSE, dropped 9.04 points, or 0.59 per cent, to 1,531.47 points.

Of the VN30 basket, 25 stocks slid and only five stocks climbed.

BIDV (BID) led the downtrend, according to data compiled by vietstock.vn, down 2.83 per cent.

The losses were limited by gains in some stocks, with Vietjet Aviation JSC (VJC) posting the best performance, up 5.23 per cent. It was followed by Development Investment Construction JSC (DIG), Hoà Phát Group (HPG) and Vietnam Airlines JSC (HVN), up in a range of 1.18 – 6.77 per cent.

Meanwhile, on the Hà Nội Stock Exchange (HoSE), the HNX-Index rose 5.37 points, or 1.25 per cent, to 435.61 points, marking the fourth straight session of gains on Friday.

During the session, investors poured VNĐ2.4 trillion into the northern bourse, equivalent to a trading volume of over 85 million shares.

On the other hand, foreign investors continued to be net buyers on HoSE, with a value of VNĐ99.86 billion. However, they net sold a value of VNĐ48.96 billion on HNX. VnExpress News