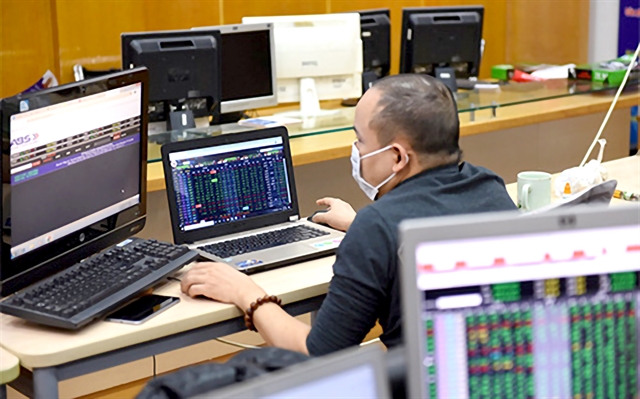 An investor talks on phone while looking at stock trading boards. Photo cafef.vn

HÀ NỘI — The market resumes trading after a week off due to the Lunar New Year festival. Historical statistics suggest that the market is likely to be positive after the holiday.

“The positive trend is expected to continue in the Year of the Tiger as the country’s economy recovers from the low base of the previous year.”

Technically, historical statistics showed that the market is usually quite positive after Tết, Thắng added.

The Vietnamese stock market after Tết has inched up five times in six years during the 2016-2021 period, and only declined in 2020 due to the impact of COVID-19, according to statistics from SHS.

On that basis, the analysis team of SHS forecasts that in the first trading week of the New Year of the Tiger, the market benchmark VN-Index is likely to continue to recover and head towards the psychological resistance of 1,500 points.

“Investors who have engaged in bottom fishing can continue to hold their current portfolio to take advantage of the uptrend,” Thắng said.

“In the negative scenario, if bad news happens during the week holiday and selling pressure increases after Tết, the VN-Index could correct back to the support zone of 1,400-1,450 points.

“This will also be an opportunity  for investors to accumulate more stock proportions in the portfolio.”

Similarly, Đinh Quang Hinh, Head of Macroeconomics and Market Strategy Department of VNDIRECT Securities Corporation (VND), said that the stock indices have shown a recovery effort after touching support levels in the range of 1,435-1,440 points.

“We expect that at the start of the Year of the Tiger, the market will continue to recover,” Hinh said.

“And this is the right time for investors to increase the proportion of common stocks, which have positive business prospects in 2022 and have seen a rally trend over the past several months like banks, construction materials and retail stocks, in their portfolios.”

Market consensus said that the stock market entered the Year of the Tiger with a positive trend thanks to expectations of a quick recovery of the economy.

On the Hồ Chí Minh Stock Exchange (HoSE), the VN-Index ended the last trading session before Tết on January 28 at 1,478.96 points.

For the week, the index recovered slightly by 0.4 per cent after falling for two consecutive weeks. The market liquidity was also lower than the average level for the second straight week.

“It is reasonable because of investors’ holiday spirit, which is the same as in previous years,” Thắng said.

In the market, bank stocks continued to lead the uptrend for the whole week, with many stocks witnessing big gains such as BIDV (BID) up 1.3 per cent, Vietinbank (CTG) up 3.8 per cent, Techcombank (TCB) up 6 per cent, VPBbank (VPB) up 6.9 per cent or MBBank (MBB) up 6 per cent.