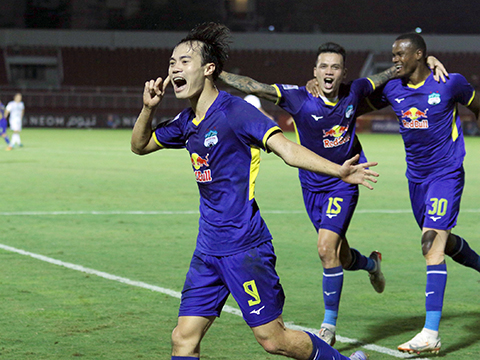 HCM CITY — Hoàng Anh Gia Lai Football Club drew 1-1 against Jeonbuk Hyundai Motors FC of South Korea on Monday, but it was not enough to progress in the AFC Champions League.

In Thống Nhất Stadium where just four days ago HAGL suffered the agony of a stoppage time defeat against the K-League Champions, Kiatisuk Senamuang’s team managed a draw this time around.

Two changes were made to the line-up from last Friday’s match, with Lương Xuân Trường and Trần Minh Vương replacing Jefferson Baiano and Nguyễn Tuấn Anh. Jeonbuk made seven changes to their starting eleven.

The Korean powerhouse was active from the start and had five corners in the first 20 minutes. On 17 minutes, one such corner worked wonders for them when Takahiro Kunimoto’s cross met the head of Moon Seon-min, who rose above Washington Brandao and scored the opening goal for the visitors.

Jeonbuk piled on the pressure in the remaining minutes of the first half, but the HAGL defence stayed strong and had some decent chances through counter-attacks. One of them was a well-struck volley from Nguyễn Công Phượng that blazed over the bar.

Jeonbuk’s manager, Kim Sang-sik made three changes at half-time, whereas Kiatisuk brought on young midfielder Lê Hữu Phước for Xuân Trường, who had problems with his stamina.

With Jeonbuk taking their foot off the gas early, cracks appeared in their defence with HAGL always looking to exploit. On minute 63, centre-back Nguyễn Hữu Tuấn advanced from the back and dribbled all the way to the final third, where his through pass found Nguyễn Văn Toàn who put the ball in the top of the Song Bum-keun’s net.

This was Toàn’s first goal in a year.

HAGL, just like last Friday, could have won the game in the last minutes, but Văn Toàn and Kim Dong-su couldn’t convert their chances and the match ended all square

Despite having played bravely, HAGL are technically out of the Champions League, with just two points to their name. Should they win their last two matches and second place Jeonbuk lose both, they still cannot qualify due to the head-to-head criteria against the Koreans (one loss, one draw). Jeonbuk meanwhile, lost their first place in the group to Yokohama F. Marinos, who beat Sydney FC 3-0.

“I am proud of today’s result,” said coach Kiatisuk at the post-match conference.

“We were the underdogs and had only three days to prepare but the players played their hearts out for the fans.”

The Mountain Team will look to cheer up their supporters in their last two matches against Yokohama on Thursday and Sydney on 1 May. — VnExpress News