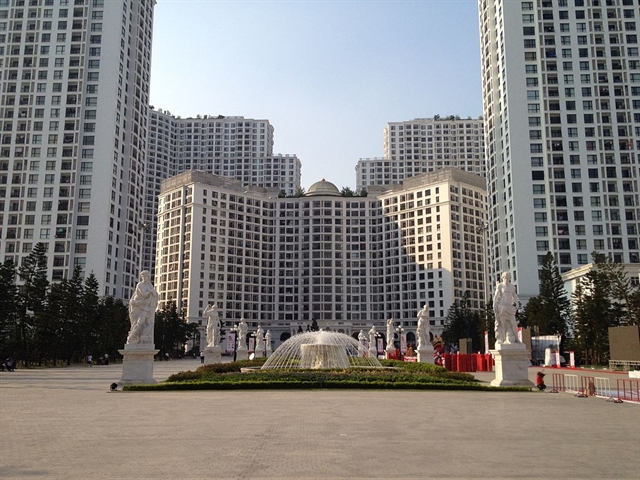 A view of Royal City, a project developed by Vingroup. The company’s shares led the market rally trend yesterday, up 2.7 per cent. Photo vinhomesmartcitytaymo.vn

HÀ NỘI — Benchmark indices ended the week on a positive note, as risk appetite improved ahead of a long holiday.

The market’s breadth was positive with 339 stocks of a total 533 traded on HoSE increasing. Liquidity also rose sharply compared to the previous session, of which the order matching on the southern bourse surged 25.7 per cent to VNĐ15.4 trillion (US$817.3 million).

The uptrend was due to gains in many large-cap stocks, especially in banking and realty sectors. The 30 biggest stocks tracker VN30-Index rose by 16.43 points, or 1.17 per cent, to 1,417.31 points. In the VN30-basket, 21 stocks climbed, while only seven declined and two ended flat.

In the top five stocks influencing the bullish trend, Vingroup (VIC) was the biggest gainer yesterday, up 2.7 per cent. Other stocks were Techcombank (TCB), Asia Commercial Joint Stock Bank (ACB), Mobile World Investment Corporation (MWG), and Becamex (BCM), up in a range of 2.9-5.48 per cent.

The trend was in line with expectations from analysts of Saigon – Hanoi Securities JSC (SHS) that the VN-Index is likely to recover in the last trading session to inch closer to the psychological level of 1,400 points.

Investors poured VNĐ1.7 trillion into the northern market, equivalent to a trading volume of 78.7 million shares.