Manga series about Vietnamese footballer to be released 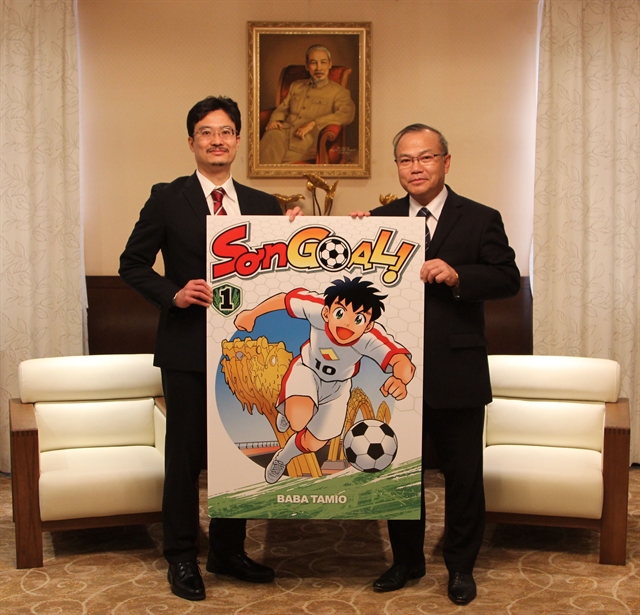 HÀ NỘI — A manga series about Vietnamese football will be introduced to both Japanese and Vietnamese readers by Japanese publisher Kadowaka Corporation.

Sơn Goal, drawn by Japanese artist Baba Tamio, is the story about the journey of a Vietnamese-Brazilian boy named Sơn and his passion for football. He moves to Việt Nam to study after his father, a Brazilian, comes there to work.

In Việt Nam, he makes friends with a group of teenagers and helps their football team to become undefeatable.

At a meeting with Vietnamese Ambassador to Japan Vũ Hồng Nam in Tokyo, Aoyagi Masayuki, chief publishing officer at Kadokawa Corporation, said it is hoped that Sơn Goal spreads joy in sports and the spirit of teamwork among children from both countries.

Famous landscapes and tourist attractions in Việt Nam appear in the series like the Dragon Bridge and Mỹ Khê Beach in the central city of Đà Nẵng to provide foreigners with a better understanding of Việt Nam and the people.

“However, we found that the main characters in such comics could not properly reflect Vietnamese culture. Therefore, we have decided to create a comic series that is set in Việt Nam and features the culture of the nation.”

Kadokawa plans to send 1,000 books to Vietnamese children through the Vietnamese Embassy in Japan after the series is completed

Vietnamese Ambassador Nam thanked the Japanese publishing house for the idea, adding that the publication would be a meaningful event to celebrate the 50th anniversary of establishing diplomatic relations of the two nations.

He also expressed his belief that the series would be warmly welcomed by Vietnamese children, who have long been Japanese and football enthusiasts.

As revealed by a representative of the Vietnam Football Federation in Japan and a liaison between Kadokawa and Vietnamese partners, Nguyễn Võ Huyền Dương, Sơn Goal would be introduced to Vietnamese readers this May.

Besides the series, Masayuki said that the Japanese publishing house would cooperate with Hanoi University of Industrial Fine Arts and publishers in Việt Nam to produce other manga series made by Vietnamese.

Born on April 10, 1968 in Okayama Prefecture, artist Baba Tamio graduated from the Faculty of Education of Okayama University. Some of his notable works include his debut Adam’s Ale, Nijiiro Ramen, Menyadai Road Narutoya!, among others. — VnExpress News