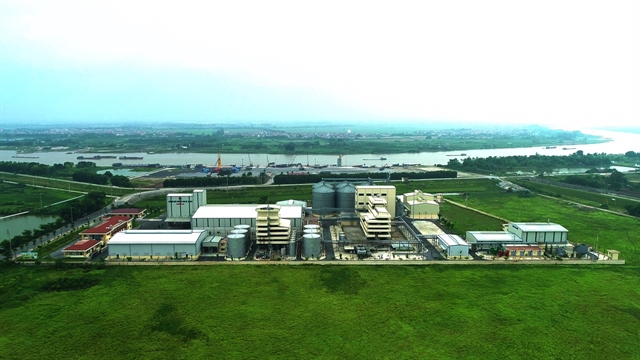 VNDirect Securities Corporation said that the Russia-Ukraine conflict had a negative impact on the animal feed industry as supplies of raw materials for animal feed production like corn, soybeans and wheat, are disrupted, causing prices to rise sharply.

Under higher feed prices pressure, live hog prices also posted an increase, but not significantly. The domestic live pig market in March fluctuated around VNĐ52,000-57,000 a kg, up 11-14 per cent compared to the beginning of the year, while the farm-gate price of chicken declined by 11 per cent. However, compared to the same period last year, live pork prices fell by 23-27 per cent, while chicken prices climbed by 19 per cent.

Due to the pressure, many livestock enterprises reported a sharp decrease in profits or even losses. Dabaco Group (HoSE: DBC) announced that its first quarter net revenue increased slightly by 13.3 per cent on-year to VNĐ2.8 trillion. But the sharp rise in cost of goods sold caused its gross profit to dip by 60 per cent to VNĐ254 billion. With other expenses did not fluctuate much, profit after tax was only VNĐ8.6 billion, equal to 2.3 per cent of the same period last year. This is Dabaco’s lowest profit since the second quarter of 2019.

The company said that the complicated developments of the Russia-Ukraine conflict had affected the supply chain of input materials such as corn, wheat and soybeans, causing a serious shortage. The disruption of the supply chain and obstacles due to the pandemic caused the cost of animal feed to inch higher, while the price of livestock products did not increase.

If only taking the meat business into account, the first quarter’s revenue recorded a slight decrease of 5.4 per cent due to the decrease in the price of pork, while sales volume increased.

Masan MEATLife’s earnings before interest, taxes, depreciation and amortisation (EBITDA) was negative VNĐ28 billion, while that of the same period last year was positive VNĐ498 billion.

The company’s leader said that pork production has entered a stable zone in the first quarter and is expected to increase by the end of the year. Masan MEATLife aims to improve its EBITDA, expand businesses through sustainable supply development, increase capacity utilisation, bring products into the WinCommerce system, and diversify its processed meat portfolio.

A report of the Ministry of Agriculture and Rural Development said that live hog prices in regions across the country in April tended to increase again due to the reopening of restaurants, schools and factories, boosting consumption, while the supply decreased and prices of animal feed climbed. Chicken and egg prices also edged higher as consumer demand gradually recovered. — VNS