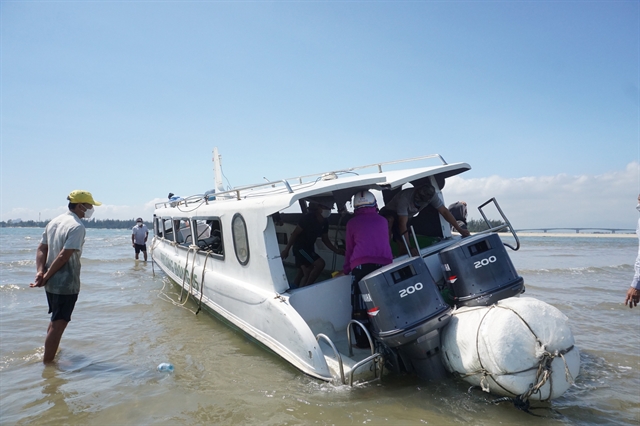 The boat wreck on the beach of Cửa Đại in Hội An. The 35-seat boat sank in the water off Cửa Đại beach on the way from Chàm Islands on Saturday. Photo courtesy of Lan Anh

QUẢNG NAM — Large inshore waves were the main reason a boat sank, killing 17, about 3km from Cửa Đại Beach in Hội An City on February 26, but the exact turn of events is still unknown.

Lieutenant Colonel Võ Văn Minh, deputy head of Quảng Nam police investigation, told a press conference on Tuesday that the incident was still under investigation and a conclusion would be announced later.

Minh said strong waves had hit the boat, and water broke onto the deck. However, the actions of crew members and traffic control agencies had not yet been fixed.

Minh said police had been collecting evidence and witnesses statements to identify possible criminal charges regarding the deadly incident.

A total of 17 deaths were found on Monday after the last missing – a three-year-old girl – was found at a rock embankment at Vinpearl Hội An resort.

Rescue forces saved 22 people, but many of the dead victims were stuck in the 35-seat close roofed deck boat, Sơn said.

Most of the dead could not escape, even though all had worn life jackets and the safety conditions of the boat and waterway had been carefully checked.

A large hole was found in the boat’s front deck when hoisted to the beach on Sunday. Some experts suspect that the ship hit a sandbank before sinking.

A close roofed deck would have trapped victims as only two entrance and exit doors were used. It would have been nearly impossible to get out through the windows.

Bùi Tân Nguyên, director of the Đà Nẵng-based Maritime Coordination and Rescue Centre No 2, said rough seas and extraordinary waves often occurred in the water between Cửa Đại and Chàm Islands in the afternoons.

Local border guard forces said the weather and sea on that day were forecast as calm and smooth with wind speeds of 2 or 3m per second, safe conditions for a boat travelling on the 20km route.

The islands are overloaded with 152 boats with 42 businesses operating boat and tourism services.

Most boats are designed for transporting from 18 to 35 passengers, each with a travel time of 25 minutes. The islands host around 400,000 tourists per year, earning VNĐ35 billion (US$1.5 million) from tickets. VnExpress News