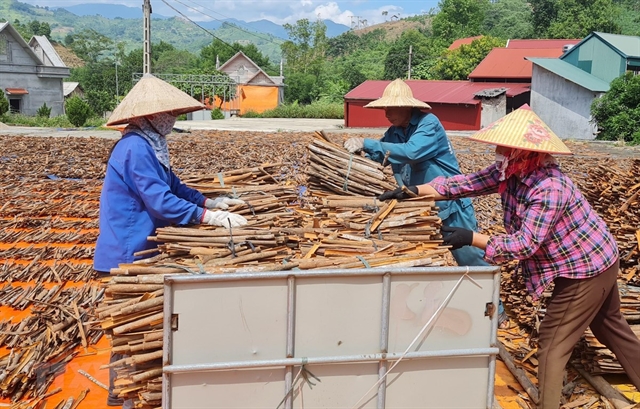 LÀO CAI — The northern mountainous province of Lào Cai has pledged to boost sustainable development of the cinnamon value chain by approving a project on cinnamon forest planting for 2021-2030.

It has also issued a policy to support the development of organic cinnamon certificates in the province for 2021-2025.

With over 70 per cent of planted forests in Lào Cai bringing in annual revenue of nearly VNĐ600 billion (US$26.4 million), organic cinnamon is being cultivated as a key export crop in the province.

However, experts said there were still unsustainable factors in the industry requiring the locality to strengthen the cinnamon value chain.

Deputy Director of Lào Cai Department of Agriculture and Rural Development, Tô Mạnh Tiến said currently, for cinnamon and cinnamon products, the province had applied the organic concept for only agricultural products but not for forest ones.

“Deep processing only stops at essential oils, compared to Korea which does not have raw materials but has a lot of other deeply processed products such as cinnamon candies, etc. In addition, numerous obstacles relating to areas such as logistics and product promotion are causing an impact on the industry’s development,” said Tiến.

The supply chain is not strictly organised, has a weak marketing capacity and less market understanding. Accessing international export markets is still obstacle-laden.

The area of ​​organic cinnamon has begun to develop but is still very small, less than 7 per cent of the total area, and the products are not diversified.

The supply chain has not been effectively implemented, especially the formation of cooperatives to connect with businesses. To expand organic cinnamon areas, it is required to set up cooperative groups to create a more efficient supply chain. 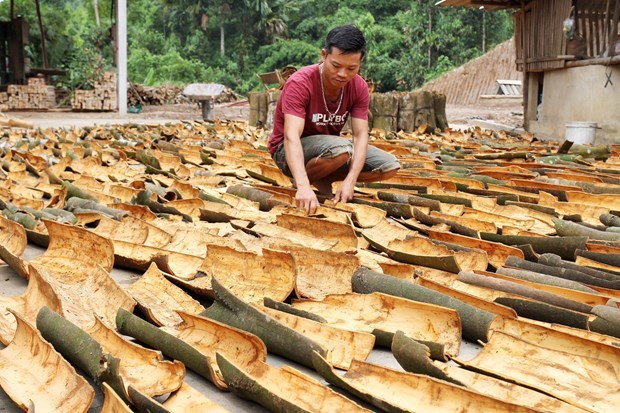 However, the main export products are cinnamon bark raw materials and essential oils with low value.

Although the province has 3,500ha of organic cinnamon, not many of the products are exported to high standard markets such as the EU and US. Cinnamon is mostly consumed in India, accounting for 81 per cent of the country’s market share.

“This is also what we need to pay attention to,” Tiến said.

Lào Cai’s cinnamon essential oils are exported to China, the EU, the US and Sri Lanka, with a volume of 315 tons per year. A small portion of about 60 tons of oils serves domestic demand.

A rapid increase in production along with traditional market share approaching its threshold is among the factors hindering the development of cinnamon in Lào Cai.

“A too fast and sharp increase of cinnamon areas will result in a rapid increase of output in the next few years, creating pressure on the traditional market. Therefore, it is necessary to consider high-standard markets to find more consuming output sources as well as improve the value of cinnamon products,” said Tiến.

With its cinnamon planting area ranked the second largest in the country, Lào Cai has been exporting cinnamon products to many markets.

“Previously, cinnamon from Lào Cai and Yên Bái provinces was mainly exported to China at a low price. Due to the support of an international project on Women’s Economic Empowerment through Agriculture Value Chain Enhancement, the price of cinnamon has increased. People have started to grow cinnamon and learned from the experience of other localities in forming the value chain,” according to Tiến.

The province has set targets to develop a concentrated cinnamon industry in the next 10 years with a focus on certified organic products managed by a digital system.

Lào Cai has issued a policy to support the development of organic cinnamon certificates in the province for 2021 – 2025, creating favourable conditions on land clearance for businesses investing in processing cinnamon products.

The province is focusing on building a geographical indication for cinnamon trees.

The province will aim to attract businesses to invest in processing cinnamon, establish farmers cooperatives for raw material and preliminarily processing, organise production links between enterprises and cooperatives, and form vocational organisations in the industry.

According to Tiến, the Tâm Hợi Cooperative link Việt Nam Tropical Products One Member Limited Liability Company has recently exported 10 containers with an output of over 100 tons of flute cinnamon and cinnamon tea to Singapore, India, and Thailand with a relatively high price of over VNĐ120,000 per kg. The co-operative has grossed an annual turnover of about VNĐ80-90 billion.

Lào Cai has suggested the Ministry of Agriculture and Rural Development advise and submit a plan on approving the organic agriculture development project for the period 2020-30 to the Prime Minister, with forestry products such as cinnamon, anise and sandalwood receiving policy support.

It has also proposed the National Assembly and the Government amend the land law, creating favourable conditions for agro-forestry-processing enterprises to build factories. — VnExpress News