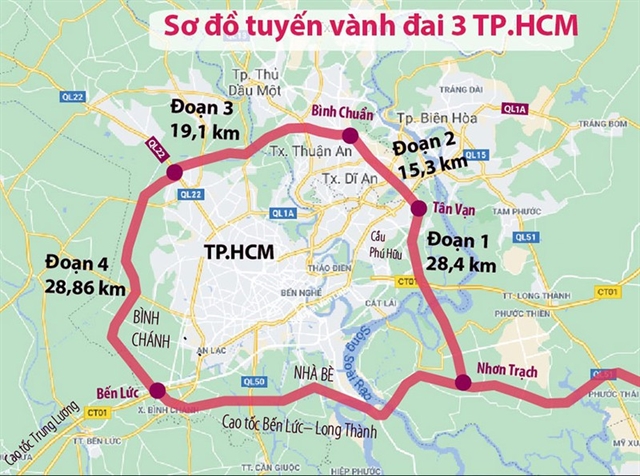 A map shows the route of the under-construction Ring Road No. 3 passing through HCM City and Đồng Nai, Bình Dương and Long An provinces. — Photo plo.vn

HCM CITY — The HCM City Department of Transport is seeking approval from the administration to auction land along the under-construction Ring Road No. 3 to raise funds for speeding up work.

Now identified as a key and urgent traffic project in 2021-25, it was approved more than 10 years ago, will be nearly 92 kilometres long and run through HCM City and Đồng Nai, Bình Dương and Long An provinces.

It will be built in four sections and have four lanes.

Some sections have been completed, but the city wants to complete it by 2025.

It is expected to help ease traffic congestion in the city and transport of goods from Cửu Long (Mekong) Delta provinces to the Nhơn Trạch Industrial Zone in Đồng Nai Province and Cái Mép-Thị Vải Port in Bà Rịa-Vũng Tàu Province.

The four localities are finalising the pre-feasibility study to submit to the Government in February for approval.

But its construction has been slower than expected, he said.

He called on the people’s committees of the five localities to be more proactive and soon complete preliminary procedures for the two highways. — VnExpress News