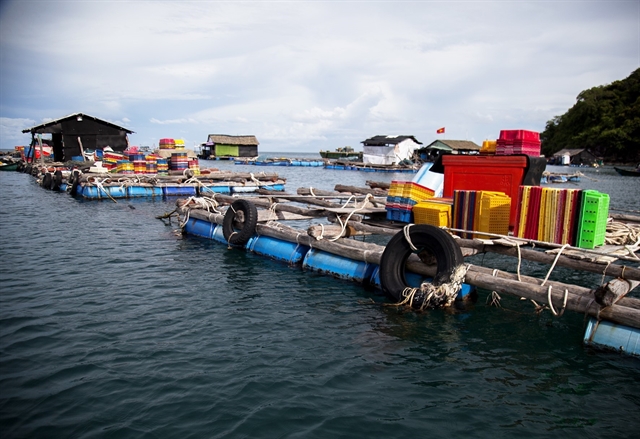 KIÊN GIANG – The Cửu Long (Mekong) Delta province of Kiên Giang is seeking to make its marine aquaculture safe and sustainable and economically efficient, according to its Department of Agriculture and Rural Development.

The province, which has the largest number of floating aquaculture cages in the delta, plans to breed marine fish in 3,890 cages this year and attain an output of 3,535 tonnes.

It also aims to breed bivalve mollusks like blood cockles, green mussels and ark clams on 23,950ha, and pearl oysters on 100ha with a harvest of around 70,000 pearls.

With its coastline of more than 200km and 143 large and small islands, it enjoys a big advantage.

At least 50 per cent of households breeding marine fish in these places will be allocated sea areas for aquaculture and will grant identified codes for their floating cages.

Other communes like Sơn Hải in Kiên Lương District, Thổ Châu in Phú Quốc and An Sơn and Nam Du in Kiên Hải will zone concentrated aquaculture areas and create linkages between various stakeholders in production and consumption.

Quảng Trọng Thao, deputy director of the province Department of Agriculture and Rural Development, said farmers would be helped with getting soft loans to resume production after a long and difficult period because of COVID.

The focus would be on high-value species and using new materials like high-density polyethylene and durable nets for making floating cages to better resist winds and waves.

The province would set up automatic water monitoring stations in concentrated marine aquaculture areas to provide data about water quality to farmers. They would have early warnings about pollution and unusual water quality for farmers to take proactive measures to mitigate them.

The province would help farmers set up co-operatives and co-operative groups and help them improve their efficiency.

It would help create linkages between production and consumption stakeholders in marine aquaculture and build brand names for produce.

Cobia farmers faced great difficulty in the last two years because of COVID but did not suffer much loss because the feed is cheap trash fish, he said.

Demand for marine fish had increased now and so selling them would be easier, he said.

“If marine fish farmers are hardworking and prices are reasonable, they will have a good income.”

In coastal An Biên and An Minh districts, farmers are expanding the farming of blood cockles in mud flats, mangrove forests and shrimp ponds.

Farmers here have bred the mollusk for many years and enjoyed steady incomes.

Nguyễn Hoàng Lương, who breeds them in a 3ha mangrove forest in An Minh’s Tân Thạnh Commune, said farmers could harvest 2 – 2.5 tonnes of blood cockles per hectare a year and sell them at VNĐ100,000 ($4.3) a kilogramme.

Trang Minh Tú, head of the An Biên Bureau of Agriculture and Rural Development, said the district was reviewing blood cockle farming to make zoning plans and develop eco-tourism.