Vietnamese teen golfer back in the lead at Lexus Challenge 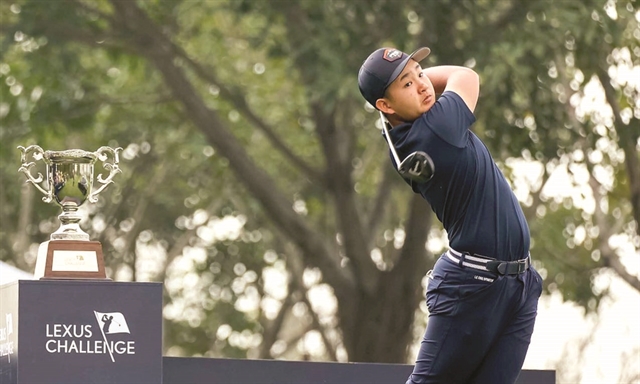 Golfer Nguyễn Anh Minh is in the lead at the Lexus Challenge 2022 after the third day of competition. — Photo: VGA tour

NINH BÌNH — Fifteen-year-old prodigy Nguyễn Anh Minh has returned to lead on the third day of the Lexus Challenge 2022 being played at the Tràng An Golf & Country Club.

Anh Minh scored six bogeys and two birdies to maintain his position atop the male group at +1. He had been in the lead two rounds earlier at -1 and -3, respectively.

Meanwhile, Park Sang Ho, who joined Anh Minh from T1, fell back to T3 (+4) due to a stoppage in the game. The Korean golfer scored two birdies but caught five bogeys and quadruple bogeys on the 14th, par 4.

Park was penalised for overshooting one shot and then added four new shots to the green. He needed two more putts to complete the hole.

Lexus Challenge 2019 runner-up Trương Chí Quân is one of two best performers yesterday. The 24-year-old golfer completed the round with an event par score to rise to second place at +3 after three days of competition.

The youngest golfer to play at the Lexus Challenge 2022 – 14 year-old Lê Khánh Hưng – continued his impressive performance with 74 strokes on the third day of the competition, including an eagle on the last hole after a perfect putt from the edge of the green.

The eagle score on hole 18 helped Hưng rise to 5th place with a score of +5.

Lexus Challenge 2022, a VGA Tour event, is taking place in the northern province of Ninh Bình from March 8 to 12, is the first tournament hosted by Vietnam Golf Association this year. It has attracted 134 golfers including pros and amateurs – a record for a tournament in Việt Nam.

For the first time ever, Lexus Challenge has hosted a division for women, creating a more fitting playground for female golfers instead of putting them in the same category as males. — VnExpress News