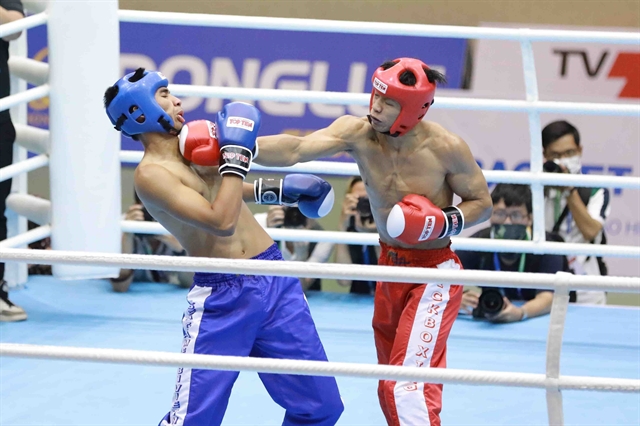 At the SEA Games 30 in the Philippines in 2019, Hưởng competed in the men’s 63.5kg low kick and won a bronze medal. At this Games, he changed to full contact with the expectation of changing his medal colour and succeeded. He is in the final and guaranteed silver at the minimum.

Earlier, in the quarter-finals, Hưởng defeated Nehyeban Carlos Alvarez of the Philippines 3-0 to reach the semi-finals.

Having to play continuously did not affect Hưởng too much as he is in great form. In addition to being able to compete at home, he competes with a rare strong physique to win.

Hưởng’s opponent in the final was Lorn Panha of Cambodia, who defeated Ophat Rodnok of Thailand 2-1 in the other semi-finals.

In the meeting with Panha in the final, Hưởng is considered to be a bit better. However, he also needs to be very careful as Panha caused surprises when reaching the final match even though he was not much fancied.

Meanwhile, Nguyễn Thị Hằng Nga earned a spot in the final women’s 48kg full contact category as she beat Nadya Nakhoir of Indonesia 3-0 in the semis.

Competing against a rival who was weaker than her, Nga quickly dominated the game from the very first minute. She constantly pressed Nakhoir to attack and score points.

Right before the end of the first half, the judges scored a 3-0 victory in favour of Nga. That gap continued to be maintained by the Vietnamese kickboxer in the remaining two rounds.

Nga is the SEA Games defending champion in this category. At SEA Games 30 in the Philippines in 2019, Nga beat Dacquel D.Renalyn of the hosts, to take the title. It was also the only female kickboxing gold for Việt Nam at the Games.

The other three Vietnamese representatives missed their chances in the finals. Bùi Hải Linh lost to Claudine Veloso Decena of the Philippines 3-0 in the women’s 52kg low kick. 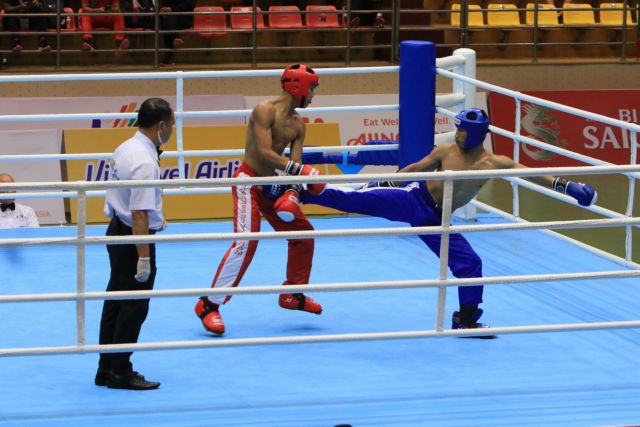 Arunno Sivapan of Thailand (in red) competes with Thongbang Seuaphom of Laos in the semi-finals of the men’s 67kg full contact kickboxing at the SEA Games on Tuesday. — VNA/- VnExpress News Photo Thái Hùng.

In the semi-finals of the low kick category, Amanda La Loupatty of Indonesia beat Piamsuk Permkhunthod of Thailand 2-1 in the women’s 51kg division.

Nearly 90 kickboxers from eight countries will compete in the low kick and full contact events, which finish on May 13.

This is the second straight time that kickboxing has been a SEA Games sport. Việt Nam topped the sport’s medal tally at the previous Games in the Philippines in 2019.