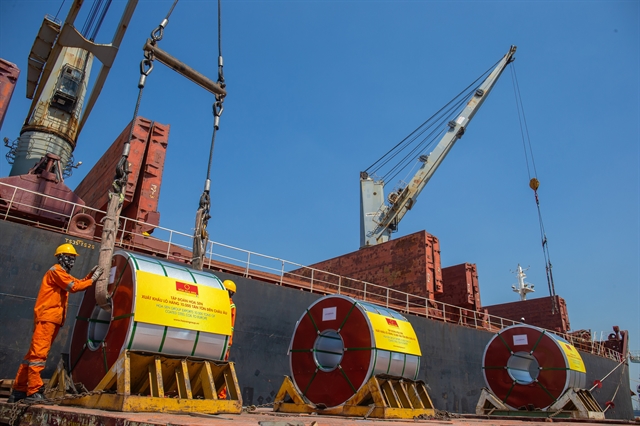 Steel for export of Hoa Sen Group. — Photo courtesy of the firm

HCM CITY — Hoa Sen Group has reported an after-tax profit of VNĐ638 billion (US$28.2 million) in the first three months of its financial year 2021-22 starting from October, increasing 12 per cent from the same period last year.

Its steel sales in the period reached 604,518 tonnes, posting a 13 per cent year-on-year increase while its revenue reached a record high of VNĐ16.9 trillion, up 86 per cent from the same period last year.

The group saw positive business results in the first phase of adapting to the “new normal” situation.

Its exports posted impressive results with galvanized steel export volume of more than 115,000 tonnes per month. With this result, Hoa Sen took the lead and accounted for 40 per cent of the total exports of galvanized steel in the country, according to statistics from the Việt Nam Steel Association.

The group would continue to promote exports by seeking and expanding new potential markets as well as diversifying its products this year.

This year is expected to have prospects as the construction demand would recover strongly, increasing steel consumption.

The group would continue to diversify its products in the local market such as building materials and interiors, developing its Hoa Sen Home supermarket system and enhancing online sales channels through its website and app.

By the end of last year, it brought over 80 Hoa Sen Home supermarkets into operation nationwide with the aim of becoming the leading galvanized steel, building material and interior group in Việt Nam. — VnExpress News