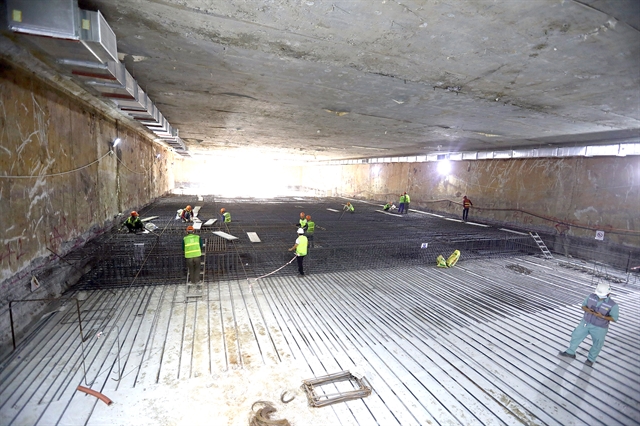 HÀ NỘI — Hà Nội will strengthen the development of underground spaces within the administrative boundaries of 20 districts by 2030.

The move comes after the People’s Committee of Hà Nội recently approved the planning of urban underground construction space in the city by 2030, a vision towards 2050.

The plan is expected to contribute to accelerating the development of urban underground spaces in the capital.

Under the newly-issued plan, major public transport hubs of the city, including the city’s urban railway stations and national railway station, will be central to developing underground public space, he said.

The plan is scheduled to build underground public spaces within 500 metres of high-rise buildings, commercial centres, fitness centres, squares, and stadiums, he said.

It is recommended that basements of high-rise buildings be used for efficient land use, he said.

The underground urban railway network will combine with the above-ground roads, creating continuous routes and connecting other areas of the city, he said.

The plan also says it will build underground parking lots in areas where there have not been enough funds to build parking areas on the ground, he added.

However, in the city’s Old Quarter, the construction of underground works will be minimised, the plan said.

Vice President of the Việt Nam Urban Development and Planning Association Đào Ngọc Nghiêm said after the plan was approved, it is necessary to perfect relevant legal basis now, especially the Land Law.

Moreover, it should consider the right to exploit and use land to build underground works and underground spaces that are not currently regulated by the law, he said.

It needs to regulate how to manage the underground space system to not only create new potentials for traffic and commercial services but also ensure environment protection and combat the impacts of climate change, he said.

Architect Trần Huy Ánh, a member of the Standing Committee of the Hà Nội’s Architect Association, said that along with perfecting the system of regulations from management, ownership to technical regulations for underground works, it is also very important to prepare a source of capital to develop an underground space system.

He said the construction and operation of underground works must use complex technology, techniques and equipment, so the cost is often much higher than that of works on the ground. If the investment capital is not available, plans could be suspended due to a lack of capital.

Nguyễn Trúc Anh, director of the city’s Planning and Architecture Department, said the department will work with units to review and adjust legal basis to ensure the consistency relating to underground works.

At the same time, the department will carry out an appraisal of detailed planning, urban design and construction investment projects of underground space to ensure synchronisation, he said.

To be considered an exemplary city offices, shops and arterial traffic systems should be located entirely underground. Above-ground would be used for parks, trees and entertainment areas, he said.

The process of urban construction and development in the world is always concerned with the use of underground space, he said.

“This is a precious resource that needs suitable policies on planning, construction and management,” he said. — VnExpress News