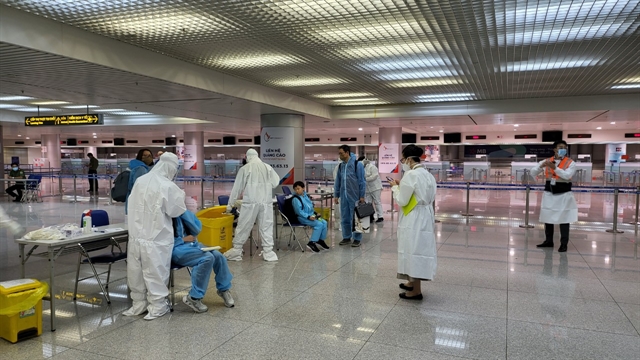 HCM CITY — The HCM City health department on Wednesday announced three Omicron cases in the community, the first cluster of the highly contagious variant to be discovered in Việt Nam.

All three Omicron cases are linked to a Vietnamese woman whose name was given as N.T.N.P., born in 1981 and with an address in Ward 17, Bình Thạnh District.

P. had received three doses of Pfizer/BioNTech vaccine previously, but tested positive for the coronavirus. The genomic sequencing results are not yet available.

P. entered Việt Nam on January 7, 2022 (she had a negative PCR test in the United States on January 4) on flight number BN5409, which landed at Cam Ranh International Airport, Khánh Hoà Province. She was quarantined in a separate room at a hotel in Nha Trang City.

She was tested for COVID-19 on January 9, and the results returned negative.

P., K. and H. had dinner together at a restaurant then returned home.

Late January 13, P. started coughing and had a slight sore throat. The next day, all three relatives showed symptoms and went for medical examinations.

Their specimens were sent to Hospital 30/04 for analysis, after the SARS-CoV-2 positive status was confirmed, the hospital forwarded the specimens to the HCM City Hospital for Tropical Diseases for genomic sequencing on January 15.

On January 16, Hospital 30/04 also confirmed P. was infected with the coronavirus.

On January 18, the Oxford University Clinical Research Unit at the HCM City Hospital for Tropical Diseases said all three relatives were infected with the Omicron variant, while the results for P. are still pending.

All four patients are in stable health condition.

The HCM City Centre for Disease Control and Prevention (HCDC) is conducting contact tracing and testing all those who had close contact with the Omicron cases.

HCDC has closely supervised quarantined people entering the country from overseas and performed genomic sequencing of positive COVID-19 test results to detect the Omicron variant of the virus.

Community rapid testing will be performed at residential areas with a surge in infections, and genomic sequencing of positive COVID-19 test results will be conducted to detect the Omicron variant of the virus in the community, according to HCDC.

All previous 70 Omicron cases as of Tuesday in Việt Nam were imported cases who were isolated upon arrival, including 30 cases in HCM City, one in Hà Nội, one in Hải Phòng, 27 in Quảng Nam, one in Hải Dương, two in Thanh Hóa, three in Đà Nẵng, two in Khánh Hòa, one in Long An, and two in Quảng Ninh.

Most were asymptomatic or showed mild fever, except for an 82-year-old woman returning from the US considered to be at high risk, but her condition is currently stable.

People with positive tests at Tân Sơn Nhất Airport in HCM City will be sent to No.12 COVID-19 field hospital in Thủ Đức City for quarantine and treatment. — VnExpress News