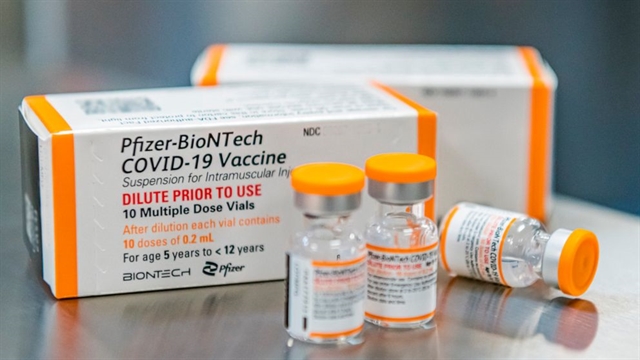 Pfizer/BioNTech COVID-19 vaccines for children aged 5 to under 12 years old. — Photo from Pfizer

HÀ NỘI — The Ministry of Health on Friday officially granted approval of Pfizer/BioNTech COVID-19 vaccines for use in children aged five to under 12 years old.

The decision was reflected in the amended approval for emergency use of the Comirnaty shots originally signed in June last year.

The decision takes effect from today.

In last week’s meeting with National Assembly deputies on schooling in COVID-19, deputy health minister Đỗ Xuân Tuyên said 98 per cent of adults (aged 18 and above) in Việt Nam had received two doses of vaccines, and booster shot coverage was at 32 per cent, while 94 per cent of children aged 12-17 had been fully vaccinated (also using Pfizer shots).

The procedures to purchase 21.9 million doses of Pfizer vaccines shots to use for 10 million children in the 5-11 age group had been “basically completed,” he said.

Prime Minister Phạm Minh Chính has asked localities and the health sector to prepare all conditions, including facilities, storage and transport, and human resources to carry out the COVID-19 inoculation of children aged 5-11 years right after the vaccines are delivered, which is expected to be at the end of April this year. — VnExpress News

Previous Hanoi FC run out of goalkeepers, V. League match postponed
Next US CDC urges Americans against travel to Vietnam