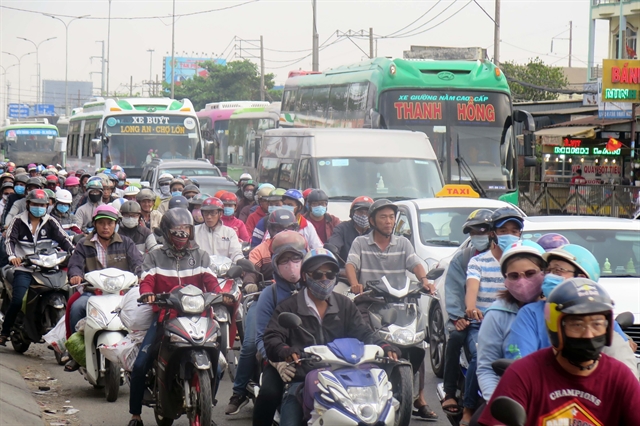 A large number of vehicles are stuck on National Highway No 1A in HCM City’s Bình Chánh District during peak hours. — VNA/VnExpress News Photo Hoàng Hải

HCM CITY — The HCM City Department of Transport wants toll to be collected from cars entering the traffic-clogged inner districts as a means to reduce gridlock and pollution.

It has submitted a proposal to the People’s Committee to implement it by 2025.

Innovative Technology Development Corporation has offered to execute it as a PPP (public-private partnership) project.

It plans to set up 36 tollbooths on streets leading to the city centre with an operating centre linked with all of them.

Most will be in districts 1 and 3 on streets leading to the downtown area. Some will also be in traffic-clogged streets in Tân Bình District such as Trường Sơn and Cộng Hòa.

The tollgates will automatically collect fees from on board units installed in cars.

Tolls will not be collected from public buses and vehicles like ambulances, fire engines and police vehicles.

The toll will only be applicable during peak hours (6am to 9am and 3pm to 9pm).

Slapping a fee for such entry is expected to reduce the number by 30-40 per cent, easing traffic jams.

The project is part of the city’s master plan to promote public transport.

But tolls alone cannot curb traffic jams, and they must be combined with other measures such as urban and infrastructure planning, and development of mass transport such as the metro and monorail, experts said.

At the end of last year there were 8.4 million vehicles registered in the city, including 819,000 cars. An average of 79 cars and 309 motorbikes are registered every day.

The number of cars and motorbikes increased by 3.5 per cent and 2 per cent last year, a year ravaged by COVID-19, compared to 2020. — VnExpress News