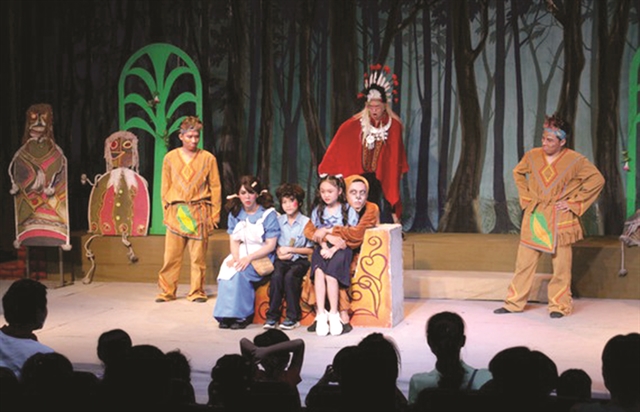 FULL OF JOY: The return of plays for children is expected to bring lots of fun and cheer to children this summer. Photo courtesy of 5B Theatre

HCM CITY — Summer has come again and so have plays and activities that entertain and educate children.

After nearly two years of the COVID-19 pandemic, many stages in HCM City are sold out or fully booked for plays for children this summer.

The 5B Theatre is performing a series of new shows including folk and fairy tales plays for children this summer.

One of them, Bộ Lạc Nanh Trắng (While Fang Village), is about bravery, self-respect, honesty and friendship. It carries messages encouraging young people to work together and fight negativity.

The production uses elements from a book series of Vietnamese fairy tales, Kho Tàng Truyện Cổ Tích Việt Nam (The Treasure of Vietnamese Fairy Tales), which was collected and rewritten by Nguyễn Đổng Chi, one of the country’s most popular cultural researchers.

The Village is performed by 20 actors, including young talents from art schools such as the HCM City Theatre & Cinematography and the HCM City University of Culture.

Đoàn Dung, 12, said that she loves to have her parents take her to the theatre.

“It’s been a long time since I’ve seen a play, so I’m really looking forward to being able to go to the theatre again,” she said.

After watching a children’s play at the 5B Theatre, Bùi Thiện Nhân, from Nhà Bè District, said: “I am a big fan of the stage. In April, I took my two children to see the play titled, Vương Quốc Của Những Người Xấu Xí (Kingdom of Ugly People).”

“Watching my children enjoy the play makes me feel happy, too,” he said.

Meanwhile, Idecaf Theatre announced that it will resume the Ngày Xửa Ngày Xưa (Once Upon a Time) series to serve a young audience.

According to Meritorious Artist Hửu Châu, the play is titled The Adventures of Captain Sinbad: The Mermaid War.

The play will be directed by Đình Toàn and will bring together familiar faces of the Idecaf stage, including some Meritorious Artists of Thành Lộc, Hữu Châu, Mỹ Duyên and many others including Đình Toàn, Lê Khánh, Hoàng Trinh, Don Nguyễn and Tuấn Khải.

The artists are practicing at Bến Thành Theatre. The play will officially premiere in early July.

Although only a few pictures have been revealed on Hữu Châu’s personal page, the return of the Once Upon a Time series received the attention and support of a huge number of fans.

Many fans have left comments expressing their anticipation for the Once Upon a Time series to return after two years of the the pandemic.

According to the Pháp Luật Thành phố Hồ Chí Minh (HCM City Law) newspaper, Hữu Châu said: “After two years when the stage had to temporarily ‘turn off the lights’ because of the impact of the COVID-19 pandemic, this return is a joy for artists like us.”

“I hope this comeback will bring to children a summer full of laughter,” he added.

Not only theatre plays, but various activities and camps for children are also returning to entertain and educate children.

The local Southern Youth Centre (SYC) resumes its life skills courses for kids in June, attracting the participation of more than 1,000 pupils. Some 100 learners were scheduled to join the first eight-day course starting June 12 and taking place in the provinces of Đồng Nai, Bình Dương, Vũng Tàu and HCM City. — VNS